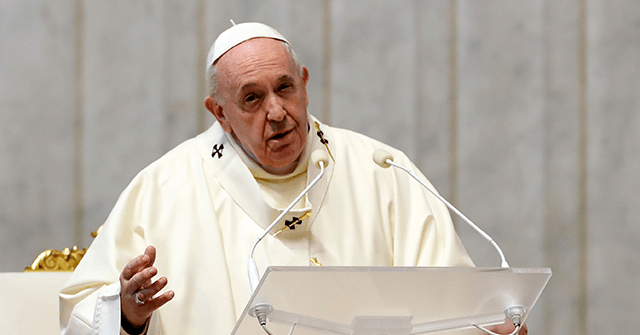 In a video message, the pope made known his prayer intention for the month of May: “We pray that financial managers will collaborate with governments to regulate financial markets and protect citizens from their dangers.”

“While the real economy, the one that creates jobs, is in crisis — how many people are out of work! — the financial markets have never been as hypertrophic as they are now,” the pontiff declared. “How far away is the world of big finance from the lives of most people!”

The pope’s message comes less than a week after he enacted a law to combat financial corruption by senior Vatican officials, barring investments in companies “contrary to the social doctrine of the Church.”

The Vatican has been embroiled in a series of financial scandals including investments in the steamy Elton John Biopic Rocketman, a high-end London real estate deal worth hundreds of millions of euros, a 25-percent partnership in Lapo Elkann’s eyewear company Italia Independent, and most recently, major financial investments in pharmaceutical companies that produce abortifacient drugs such as the morning-after pill.

“Finance, if it is not regulated, becomes pure speculation animated by monetary politics,” the pope said in Tuesday’s message. “This situation is untenable. It’s dangerous.”

“In order to prevent the poor from once again paying the consequences, financial speculation must be rigidly regulated,” Francis insisted.

“Let finance be an instrument of service, a tool to serve people and to take care of the common home!” he said.

“We still have time to start a process of global change to put into practice a different, fairer, more inclusive, sustainable economy that leaves no one behind,” he declared. “Let us pray that finance managers will work with governments to regulate financial markets and protect citizens in danger.”