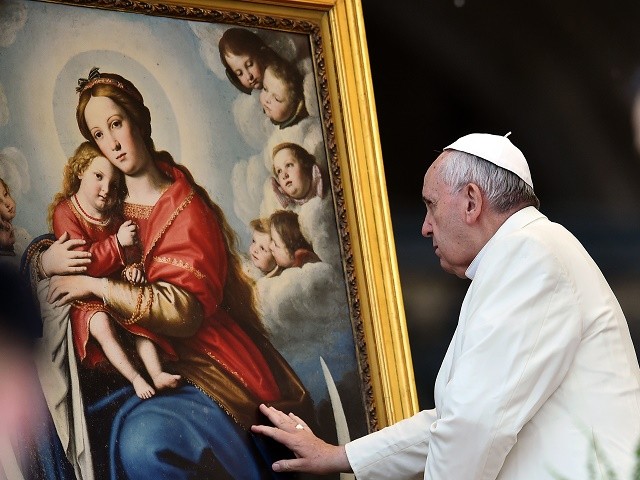 Pope Francis has continued pushing his pro-immigration message in his trip to the Baltic states, urging his hearers to “receive” the stranger even when he threatens our security and well-being.

The Virgin Mary “stands near those who suffer, those from whom the world flees, including those who have been put on trial, condemned by all, deported,” the pope said during his homily Monday at the Shrine of the Mother of God in Latvia.

“Nor is it that they are simply oppressed or exploited; they are completely “outside the system”, on the very fringes of society,” Francis said. “The Mother also stands close by them, steadfast beneath their cross of incomprehension and suffering.”

In this Latvia leg of his three-nation visit to the Baltic states, Pope Francis denounced isolationism just as several European nations have begun to insist more on national sovereignty and the right to secure borders.

The pope condemned “ways of thinking that would have us be suspicious of others,” even when statistics show that “we would be better off, more prosperous and more secure just by ourselves.”

At those times, he said, “Mary and the disciples of these lands invite us to ‘receive’ our brothers and sisters, to care for them, in a spirit of universal fraternity.”

Earlier in his trip, the pope praised Lithuanians for their history of accepting and integrating immigrants, suggesting that they have an important lesson to impart to their European brothers and sisters.

Throughout its history, “Lithuania was able to shelter, receive and accept peoples of various ethnic groups and religions,” Francis said in an address to Lithuanian authorities Saturday. “All found a place to live in this land – Lithuanians, Tartars, Poles, Russians, Belarusians, Ukrainians, Armenians, Germans.”

“Catholics, Orthodox, Protestants, Old Catholics, Muslims, Jews – lived together in peace until the arrival of totalitarian ideologies that, by sowing violence and lack of trust, undermined its ability to accept and harmonize differences,” he said.

While Europe is once again threatened by a populist spirit that focuses on national security and economic prosperity, Lithuania offers the witness of a welcoming spirit, he said.

In the world of our time, “more and more voices are sowing division and confrontation, often by exploiting insecurity or situations of conflict,” Francis said.

These voices proclaim that “the only way possible to guarantee security and the continued existence of a culture is to try to eliminate, cancel or expel others,” he said.

Lithuania is a natural “bridge between Eastern and Western Europe,” he said, since its history of welcoming others makes it especially suited to teach others.

“This is the fruit of a mature history, which you as a people can offer to the international community and to the European Community in particular,” he said.

A year ago this month, the pope kicked off a two-year Vatican campaign to provoke a “shift in thinking” on immigration, moving from distrust of foreigners to a greater openness to migrants.

The global Catholic charities network Caritas Internationalis is spearheading the campaign, which aims to “change perceptions” of migrants and refugees.

This shift in thinking involves dispelling common “myths about migration,” the organization states, which include the belief that there are more migrants than ever before, that migrants live off welfare benefits and steal jobs from citizens, that sealing borders will curb migrant flows, and that “people from poor countries migrate to rich ones.”

For his part, Pope Francis has stated that opposition to mass migration is fueled by selfishness and “populist rhetoric.”

A true change of heart is needed because the rejection of migrants is “rooted ultimately in self-centeredness and amplified by populist rhetoric,” he told visitors to the Vatican in 2017.

To combat this trend, we must “overcome indifference” and “counter fears with a generous approach of welcoming those who knock at our doors,” he said.