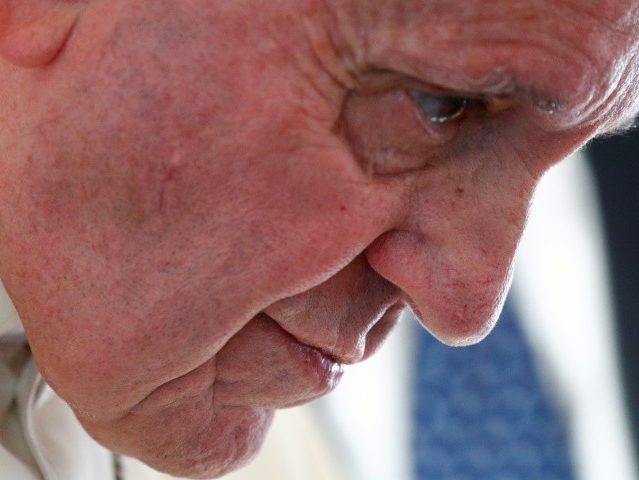 Pope Francis masterfully controlled the press briefing aboard the papal plane Tuesday in such a way as to make sure that he did not have to face embarrassing questions about how he handled the case of serial abuser Cardinal Theodore McCarrick.

The Q&A session with journalists on the return trip from the Baltic states Tuesday began with an announcement by papal spokesman Greg Burke that the first questions had to deal with the trip itself, saying the pope would later open up the floor to “other questions.”

The pontiff proceeded to take several questions from local journalists before launching into a 40-minute monologue, effectively crowding out questions on the thorny issue of how he had dealt with the McCarrick case.

When an Austrian journalist attempted to turn the conversation toward the sex abuse issue, which the pope had in fact briefly touched on during an address in Estonia, the pope said he would speak about it later.

“I will respond, but first questions about the trip. This is the rule. But, it will be the first question after the trip,” he said. He never returned to the question.

When Mr. Burke finally announced that “the questions about the trip are finished,” the pope himself took the floor rather than opening to further questions, announcing, “I would like to tell you some things on some points of the trip that I have experienced with a special strength.”

This maneuver effectively precluded any more questions on the sex abuse issue.

Italian and American journalists in particular had been poised to return to issues dodged by the pope in the last such press conference, when he had been asked exactly when he learned of McCarrick’s history of homosexual abuse. They also intended to ask why the pope had not yet launched a full-scale investigation into the McCarrick case, which the U.S. bishops’ conference had explicitly requested.

Over the last month Francis has kept silent over a series of allegations brought against him by the former papal nuncio to the United States, Archbishop Carlo Maria Viganò, going so far as to paint himself as the victim of attacks.

In his daily homilies at Mass, the pope suggested that whistleblowers who level accusations against bishops are in league with Satan, while accused pastors who keep silence are like Jesus on the cross.

Archbishop Viganò released an 11-page report on August 25 declaring that the pope had been aware of McCarrick’s misdeeds at least since 2013 and yet lifted sanctions against McCarrick that Pope Benedict had imposed, reinstating him to a position of prominence in the Vatican.

When a journalist later asked the pope whether these allegations were true, the pope refused to confirm or deny the report, saying he had no comment to offer and telling the journalists to “do their job” and investigate for themselves.