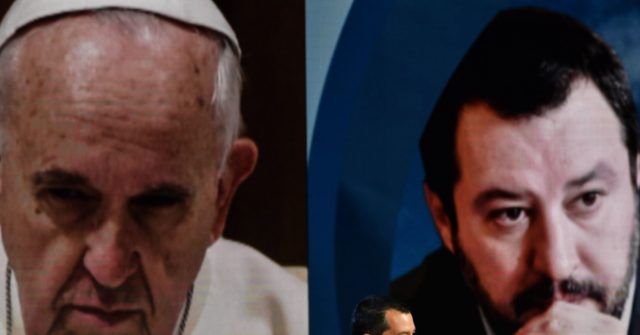 In an address to participants in a meeting of aid agencies to the Oriental Catholic Churches (ROACO), the pope seemed to fire a shot across Mr. Salvini’s bow, accusing the populist minister of closing his ports to migrants while opening them to arms dealers.

“We hear the plea of persons in flight, crowded on boats in search of hope, not knowing which ports will welcome them, in a Europe that does open its ports to ships that will load sophisticated and costly weapons capable of producing forms of destruction that do not spare even children,” the pope said, according to a rough English-language translation supplied by the Vatican.

Since Mr. Salvini is the only political leader to have closed the nation’s ports in an effort to curb illegal migration, it is difficult to interpret the pontiff’s words as applying to anyone else.

“Here we can recognize the cry of Abel rising up to God,” the pope added, a biblical reference to the second son of Adam and Eve, who was killed by his elder brother Cain. The pope often references Cain’s defensive question “Am I my brother’s keeper?” when speaking of the duty to welcome migrants.

Although the pope has never openly criticized Mr. Salvini, who is also the leader of the populist Lega party, he has found other ways to make known his views.

During a recent press conference aboard the papal plane returning to Rome from Romania, for instance, the pope urged journalists to read the Vatican newspaper, L’Osservatore Romano, if they want to know what he thinks about Italian politics.

“I read it and it would be good for you to read it, because it offers some very interesting keys to understanding things and things that I say are also there,” he said, calling it the “paper of the party.”

A week earlier, in fact, L’Osservatore Romano had published a reaction to the European elections in the form of a front-page editorial denouncing Salvini’s pro-sovereignty movement as being fundamentally opposed to Europe.

In it, the newspaper’s editor-in-chief said the Italian vote that went overwhelmingly to Mr. Salvini was “reactive” and motivated by “fear,” an opinion also alluded to by Francis in his press conference.

So often, politicians “sow hatred and fear,” said the pope, who has never shied away from political issues, and “this is terrible.”

“There is a toad, a moral sickness, in the belly of our country, which is also infecting our Church,” Spadaro lamented, after a significant number of Catholics voted for Mr. Salvini.

Father Spadaro took particular umbrage at Salvini’s “political usurpation of religious symbols,” in reference to the minister’s display of a rosary at a political rally and invocation of the blessed Virgin Mary.

The priest also said that Salvini’s nationalism “contradicts the very essence of the universality proper to Catholicism,” suggesting that in Italy “the Christian conscience has been hacked, genetically modified.”