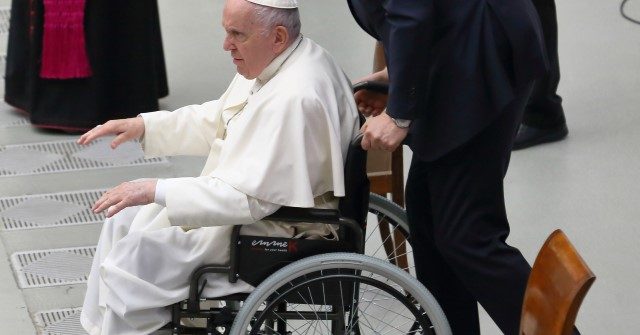 Pope Francis rejected ongoing rumors of his pending resignation from the Catholic papacy while acknowledging his health struggles.

Speaking with Catholic bishops visiting from Brazil, the Holy Father discussed his current health woes and plans for the future, throwing water on theories about an upcoming retirement. According to the Portuguese edition of the Vatican’s official news service, Pope Francis reportedly said that resigning “does not cross his mind.” The pope also addressed his ongoing health issues and reportedly told the bishops he faces certain challenges that disrupt his daily living.

In July 2021, Pope Francis underwent surgery for problems related to his colon and remained hospitalized for two weeks. He has since regularly complained of knee pain and other issues affecting his mobility. For the past month, the Holy Father has walked with the help of a cane and has occasionally used a wheelchair. Rumors of his resignation kicked into overdrive when it was reported he told bishops that he would rather resign than undergo surgery on his knees.

“Rather than operate, I’ll resign,” he reportedly said in May, according to the New York Post.

Speaking to this general audience on Wednesday, the Holy Father discussed the limitations of being elderly, advising people to accept the body’s limitations.

“When we are old, we cannot do the same things we did when we were young: The body has another pace, and we must listen to the body and accept its limits,” he said. “We all have them. I too have to use a walking stick now.”

Meanwhile, Pope Emeritus Benedict XVI, who resigned in 2013, has set the record as the longest living person to have ever served as pope at age 95.