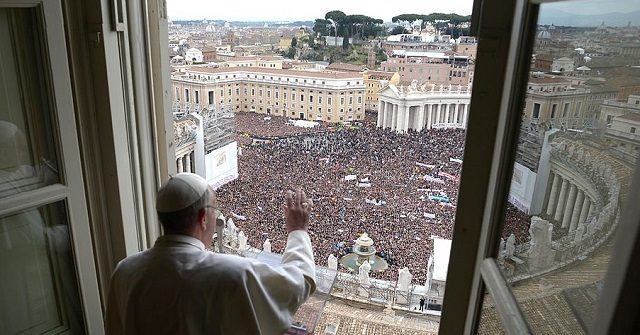 ROME — Pope Francis has called on Christians to break down walls and embrace a love without borders in a new encyclical letter released on Sunday.

“We achieve fulfilment when we break down walls,” wrote the pope, who ironically rules the world’s only completely walled-in sovereign territory, the Vatican City State.

The pope referred to walls a remarkable 14 times in his letter titled Fratelli Tutti (Brothers All), insisting that the Church wants “to build bridges, to break down walls, to sow seeds of reconciliation.”

“Each one of us is called to be an artisan of peace,” Francis said, “by uniting and not dividing, by extinguishing hatred and not holding on to it, by opening paths of dialogue and not by constructing new walls.”

The pope said that his new letter was inspired by Saint Francis of Assisi who lived in a world “bristling with watchtowers and defensive walls” where “cities were a theatre of brutal wars between powerful families, even as poverty was spreading through the countryside.”

Building walls reveals a deep-seated fear of others and fear of the unknown, the pontiff wrote, and a desire for security in one’s own little world.

“There is a kind of ‘local’ narcissism unrelated to a healthy love of one’s own people and culture,” Francis said. “It is born of a certain insecurity and fear of the other that leads to rejection and the desire to erect walls for self-defence.”

“Today too, outside the ancient town walls lies the abyss, the territory of the unknown, the wilderness,” he wrote. “Whatever comes from there cannot be trusted, for it is unknown, unfamiliar, not part of the village. It is the territory of the ‘barbarian,’ from whom we must defend ourselves at all costs.”

“As a result, new walls are erected for self-preservation, the outside world ceases to exist and leaves only ‘my’ world, to the point that others, no longer considered human beings possessed of an inalienable dignity, become only ‘them,’” he said.

This in turn yields to “the temptation to build a culture of walls, to raise walls, walls in the heart, walls on the land, in order to prevent this encounter with other cultures, with other people,” he added. “And those who raise walls will end up as slaves within the very walls they have built. They are left without horizons, for they lack this interchange with others.”

“If only we might rediscover once for all that we need one another, and that in this way our human family can experience a rebirth, with all its faces, all its hands and all its voices, beyond the walls that we have erected,” he wrote.

The original wall encompassed the entire Vatican hill, surrounding what came to be known as the Leonine City, but was later reduced to circumscribe the 110-acre Vatican City that exists today.