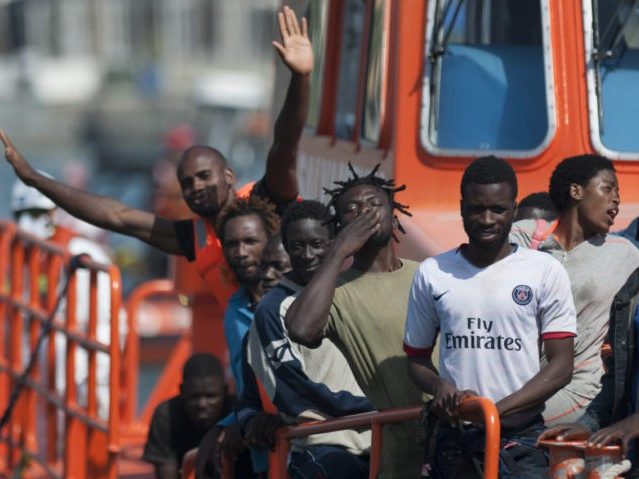 Nations do not build themselves, they “are built by migrants, just as migrants built Europe,” Pope Francis told a group of missionaries this week.

“Europe was not just born like that,” the pope told a delegation of Scalabrini missionaries in off-the-cuff remarks in the Vatican Monday. “Europe was made by many waves of migrants over the centuries.”

Using the example of the “caravan traveling from Honduras to the United States,” Francis said that migrants prefer to stick together, to move as a group rather than to go it alone like “free agents.” In this way, migrants form their own “communities.”

“I am the son of migrants,” the pope said, “and I remember in the post-war period — I was a boy of 10 or 12 years — when, where my father worked, Poles began to arrive to work, all migrants, and I remember how well they were received.”

“Argentina has this experience of welcoming, because there was work and it was also needed,” he said. “And Argentina — from my experience — is a cocktail of migratory waves.”

You have to teach others how to welcome the stranger, Francis said, “and give all the possibilities to the nations that have everything or enough” to welcome foreigners.

“I am very struck by God’s Word: already in the Old Testament it underscored this, welcoming the stranger, ‘remember that you too were once a stranger,’” he said.

“It is true that today there is a wave of closure towards the foreigner, and there are also many situations of trafficking of foreigners; foreigners are exploited,” he said.

The pope compared Europe’s efforts to seal its borders with its demographic crisis caused by low birth rates. In both cases the fear of the stranger — the foreigner or the child — keeps people’s hearts closed, he suggested.

Well-being is a “bad word,” Francis said. “Well-being is suicide” because it leads to two things: closing ports and closing to new life in the family.

Nations close their ports “so they won’t be disturbed,” he said, only allowing in “those people who contribute to my well-being.”

The search for well-being also leads to “not being fruitful,” he said. “Today we have this drama: a demographic winter and the closing of ports.”

“Another phenomenon of migrants — let’s consider the caravan traveling from Honduras to the United States — is to stick together,” Francis said. “The migrant usually tries to go in groups. Sometimes he has to go alone, but it is normal to go as a group, because we feel stronger in migration.”