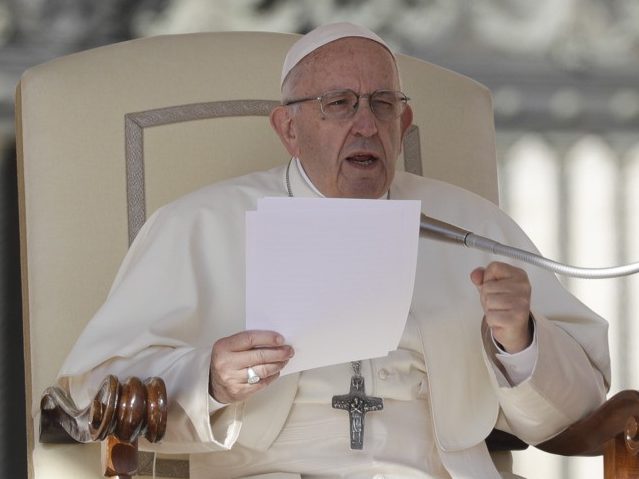 ROME — For Jesus, insults are a way of “killing” our brothers and sisters, Pope Francis said Wednesday, urging his hearers to commit to never insulting anyone.

“We are in the habit of insulting other, it’s true, and insulting others becomes like breathing,” the pope told the crowds gathered in Saint Peter’s Square for his weekly audience. “But Jesus tells us: ‘Stop, because insults hurt, they kill.’”

Insulting others “is a way of killing a person’s dignity,” Francis continued. “It would be wonderful if this teaching of Jesus entered our minds and hearts, and each of us would say: ‘I will never insult anyone.’”

“That would be a beautiful resolution, because Jesus tells us: ‘Look, if you despise others, if you insult them, if you hate them, this is murder,” Francis said, making reference to a passage of Saint Matthew’s gospel.

In the passage of the Gospel that we have just heard, Jesus states that, “before God’s court, even anger against a brother is a form of murder,” Francis said. “This is why the Apostle John wrote: ‘Whoever hates his brother is a murderer.’”

Jesus invites us to interrupt the offering of the sacrifice in the temple if we remember that a brother or sister is offended against us, to go and look for him and reconcile with him, the pope said. “We too, when we go to Mass, should have this attitude of reconciliation with the people we have had problems with.”

“Think of the gravity of insults, of contempt, of hatred,” he said. “Jesus compares them to killing.”

“Man has a noble, very sensitive life, and possesses a hidden ‘I’ that is no less important than his physical being,” Francis said. “In fact, an inappropriate expression is often enough to offend the innocence of a child; a gesture of coldness is enough to hurt a woman; and to break the heart of a young person it is enough to deny him trust.”

“To annihilate a man, just ignore him. Indifference kills,” the pope added. “It is like saying to the other person: ‘You are dead to me,’ because you have killed him in your heart.”