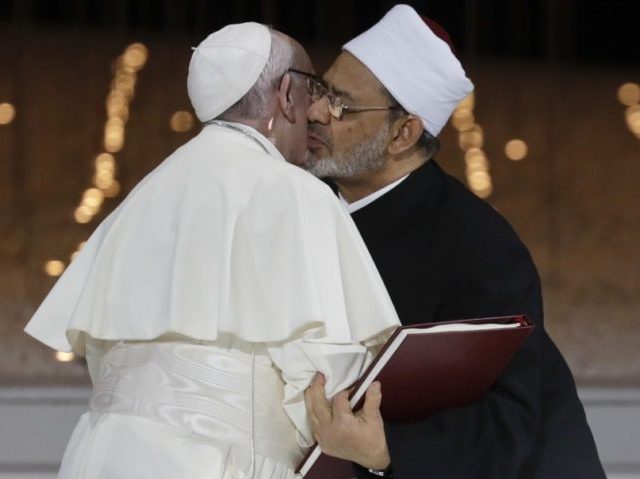 Christianity and Islam have more in common than people think, Pope Francis said Wednesday, and the two religions defend common values that are necessary for the future of civilization.

“Despite the diversity of cultures and traditions, the Christian and Islamic worlds appreciate and protect common values: life, family, religious sense, honor for the elderly, the education of the young, and others as well,” the pope told the crowds gathered in Saint Peter’s Square for his weekly general audience.

The pontiff devoted his weekly address to recapping highlights from his recent three-day trip to the United Arab Emirates, the first visit ever from a pope to the Arabian Peninsula, the birthplace of Islam.

“In an era like our own,” Francis said, “in which the temptation is strong to see a clash between the Christian and Islamic civilizations and to consider religions as sources of conflict, we wanted to give a clear and decisive sign, that it is possible to come together, to respect one another and to dialogue.”

On Monday, the pope met with Emirate leaders and signed a joint declaration together with Sheikh Ahmed el-Tayeb, the grand imam of Cairo’s Al-Azhar University, condemning “acts of murder, exile, terrorism and oppression” carried out in God’s name.

We “resolutely declare that religions must never incite war, hateful attitudes, hostility and extremism, nor must they incite violence or the shedding of blood,” the document reads. “These tragic realities are the consequence of a deviation from religious teachings.”

In Wednesday’s address in the Vatican, Francis said that the text served to jointly affirm “the common vocation of all men and women to be brothers and sisters because they are God’s sons and daughters, and we condemn all forms of violence, especially those with religious motivation.”

On Tuesday, the pope celebrated an outdoor Mass in Abu Dhabi with the attendance of an estimated 170,000 faithful, the largest public act of Christian worship ever held on the Arabian Peninsula.

At this high-point of his historic three-day visit to the United Arab Emirates, the pontiff told the faithful to be “oases of peace” during his homily, in which he also urged them to live by the Beatitudes preached by Jesus.

The pope called the trip “short but very important,” declaring that it represents “a new page in the history of dialogue between Christianity and Islam and in the commitment to promote peace in the world on the basis of human brotherhood.”

“A pope went to the Arabian Peninsula for the first time,” Francis said Wednesday. “And Providence wanted it to be a pope by the name of Francis, 800 years after the visit of St. Francis of Assisi to the sultan al-Malik al-Kamil.”

“I often thought of Saint Francis during this journey: he helped me to keep the Gospel, the love of Jesus Christ in my heart, while I was living the various moments of the visit,” he said.

The pope said that during the trip he prayed that “dialogue between Christianity and Islam might be a decisive factor for peace in today’s world.”