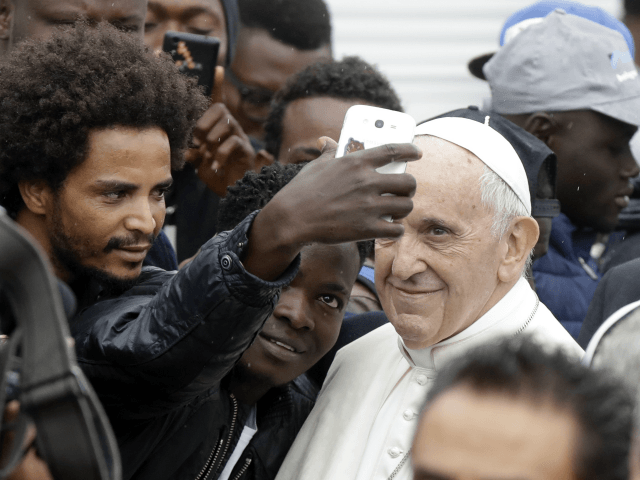 Pope Francis launched an appeal to European leaders Sunday, asking them to welcome a group of African migrants aboard two NGO vessels.

“For the last several days, 49 people rescued in the Mediterranean Sea have been aboard two NGO vessels in search of a safe harbor where to disembark,” the pope said after his weekly Angelus message Sunday.

“I would like to make a heartfelt appeal to the leaders of Europe to demonstrate real solidarity with these people,” he said.

The migrants are aboard two ships belonging to the German NGOs Sea Watch and Sea Eye, which took on 32 and 17 migrants respectively and are still waiting for a port to land them.

The majority of the migrants are reportedly from the African nations of Côte d’Ivoire, Nigeria, and Libya and have been aboard the ships since before Christmas.

“Sea Watch 3 is not suitable for keeping women, men and children in need of assistance and a safe haven for a long time. Our doctors are concerned,” the German NGO wrote on Twitter.

In Italy, differences of opinion have emerged between components of the joint government of the Lega party and the Five-Star Movement (M5S) over the issue.

“We will not retreat on the migration policy, which has allowed us to considerably reduce landings, but when it comes to women and children we are ready to give a lesson to all of Europe and to welcome them,” said deputy premier, Luigi Di Maio of the M5S.

“There are women and children a mile from the Maltese coast for the last 14 days,” he said, “and the EU puts its head in the sand and Malta does not do its duty. It is an ignoble thing,” he said.

Interior Minister Matteo Salvini, on the other hand, has held fast to his policy of closed ports.

“We do not give in to blackmail: two NGO ships are in Maltese territorial waters; the people on board must be disembarked in Valletta,” he said.

Mr. Salvini has called Europe’s attitude in the matter “shameful.”

“Evidently, lectures in humanity are only addressed to Italy, but we do not give in to blackmail and lies,” he said.