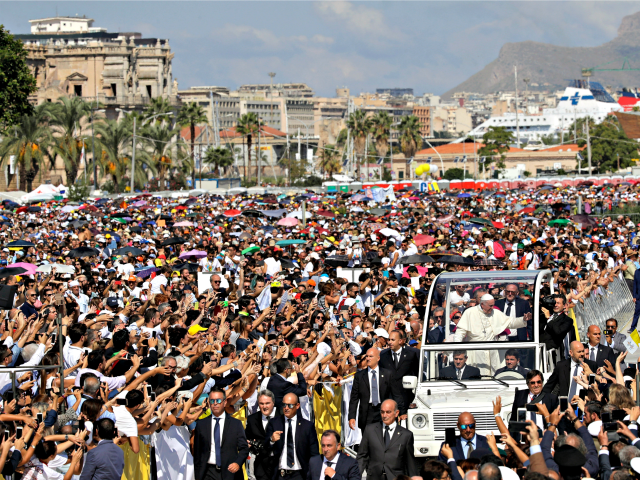 Leaving aside his frequent criticisms of populism, Pope Francis called for a “Christian populism” during a visit to Sicily this weekend, insisting that true populism must listen to and serve the people.

Seeming to channel John F. Kennedy, the pope invited his hearers to take initiative rather than asking what the Church and society can do for them.

“Wait not for the Church to do something for you, but begin yourself,” Francis said. “Wait not for society to do it, do it yourself.”

The pope’s apparent openness to populism—or at least a version of it—marks a significant change from earlier discourses, in which Francis condemned populism, tying its rise to selfishness and egotism.

Last year, the pontiff warned of the perils of populism in western democracies, telling the German newspaper Die Zeit that “populism is evil and ends badly, as the past century showed.”

In an anti-nationalist speech in March 2017, the pope told European heads of state that there is a need “to start thinking once again as Europeans so as to avert the opposite dangers of a dreary uniformity or the triumph of particularisms.”

The European Union will only be lasting and successful if the common will of Europe “proves more powerful than the will of individual nations,” Francis said, advocating for a stronger, consolidated Europe against the rising tide of populist movements.

Solidarity is “the most effective antidote to modern forms of populism,” Pope Francis told the European Union leaders, Francis said, while denouncing nationalism as a modern form of selfishness.

The pontiff contrasted solidarity, which draw us “closer to our neighbors,” with populism, which is “the fruit of an egotism that hems people in and prevents them from overcoming and ‘looking beyond’ their own narrow vision.”

This past June, Pope Francis went further still, insisting that populism was not the solution to Europe’s immigration crisis, just as Italy’s new populist government was beginning to enact measures to curb illegal immigration.

In an interview with Reuters, the pope was asked what he thought the solution is to the immigration crisis that seems to be causing Europe to crumble.

“Populism is not the solution,” Francis said emphatically, adding that Europe would disappear without migrants because no one is having children.

Summing up, the pope said that “populism does not solve the problem; what solves it is welcoming, studying, settling, and prudence, because prudence is a virtue of government and the government must reach an agreement. I can receive a certain number and settle them.”

On Tuesday, the Vatican and the World Council of Churches (WCC) will begin a two-day joint conference in Rome on “Migration, Xenophobia and politically motivated Populism.”

The WCC is partnering with the Vatican department for Promoting Integral Human Development in organizing the conference as part of ongoing work toward “peace-building and migration.”

The secretary general of the WCC, Rev. Olav Fykse Tveit, said the meeting would be a “very useful and significant workshop to dig a bit deeper” into the problems of xenophobia as an expression of populism, as well as its links to racism, conflict, and violence in countries around the world.