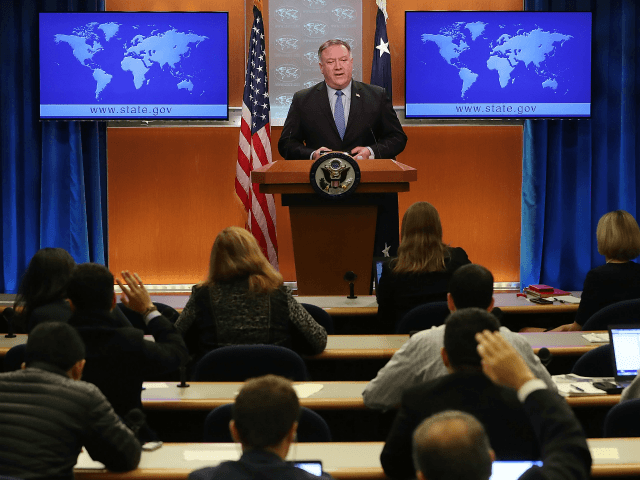 Secretary of State Mike Pompeo told reporters on Tuesday that a continued close relationship with Saudi Arabia is not a matter of arms sales but national security.

Khashoggi disappeared following a visit to the Saudi embassy in Istanbul, Turkey. The Saudi government has confirmed his death but failed to provide his remains or a consistent explanation for why he was killed.

Reporters asked Pompeo at a press briefing Tuesday about the United States’ stance toward the kingdom in the wake of the murder and the CIA’s investigation.

“It is the president’s obligation – indeed, the State Department’s duty as well – to ensure that we adopt policies that further America’s national security,” Pompeo said. “So as the president said today, the United States will continue to have a relationship with the Kingdom of Saudi Arabia.”

Pompeo noted that the relationship with the kingdom “is a long, historic commitment, and one that is absolutely vital to America’s national security.”

“We are determined to ensure that we continue to make sure that we take care of the American people in all of the strategic decisions we make about with whom we work around the world,” Pompeo said.

“There has been an enormous effort with respect to fact-finding pertaining to the death, the murder, of Jamal Khashoggi,” Pompeo said. “A lot of U.S. resources have been devoted to determining the facts to the best of our ability to determine precisely what happened there.”

Pompeo said 17 people in Saudi Arabia have been sanctioned in connection with the investigation.

“We are at the same time committed to making sure that we place America’s national security interests and all the actions that take place in the context of doing the right thing to make sure that America continues to thrive and grow,” Pompeo said. “And when we do that, the world is better off for it too, and the Middle East is better off as well.”

On Tuesday, Trump said he is taking the “America first” approach to foreign policy and that abandoning the kingdom would be a mistake.

“If we abandon Saudi Arabia, it would be a terrible mistake,” Trump said, noting that nothing definitive about Khashoggi’s murder.

“We’ll see how that all works out, it’s a very complex situation,”  Trump said.