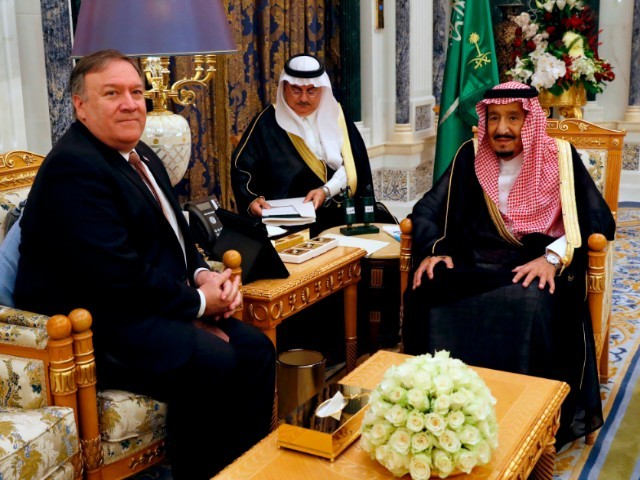 Secretary of State Mike Pompeo announced Tuesday that the U.S. will revoke the visas of Saudi Arabia officials involved in the death of Washington Post opinion writer Jamal Khashoggi.

“We have identified at least some of the individuals responsible, including those in the intelligence services, the royal court, the foreign ministry, and other Saudi ministries who we suspect to have been involved in Mr. Khashoggi’s death,” Pompeo told reporters during a press briefing at the State Department. “We are taking appropriate actions, which include revoking visas, entering visa lookouts and other measures.”

“We are also working with the Treasury Department to review the applicability of global Magnitsky sanctions to those individuals,” he added. “These penalties will not be the last word on this matter from the United States. We will continue to explore additional measures to hold those responsible accountable.”

Vice President Mike Pence said earlier that Khashoggi’s death at Saudi Arabia’s consulate in Istanbul, Turkey, “will not go without an American response.”

The visa revocations are the first punitive measures taken by the administration against the Saudis since Khashoggi disappeared after entering the consulate on October 2.

Visa records are considered confidential and Pompeo did not say which or how many Saudi officials would have their visas revoked. Saudi authorities have detained 18 people in connection with Khashoggi’s death, which officials say was accidental despite Turkish allegations that Khashoggi was intentionally killed.

President Donald Trump on Tuesday also criticized the Saudi operation that killed Khashoggi, calling it one of the “worst cover-ups in the history of cover-ups.”

The president told reporters in the Oval Office that he’s expecting a full report on the killing soon and said the Kingdom had “a very bad original concept” and was “carried out poorly.”

President Trump then slammed the events following Khashoggi’s death “the worst cover-up ever.”

Saudi Arabia has claimed Khashoggi, who wrote critically about Saudi Crown Prince Mohammed bin Salman, died accidentally in a brawl at the Saudi Consulate in Istanbul. However, Turkish officials say a 15-men team tortured, killed and dismembered the writer and say Saudi officials had planned the killing for days.