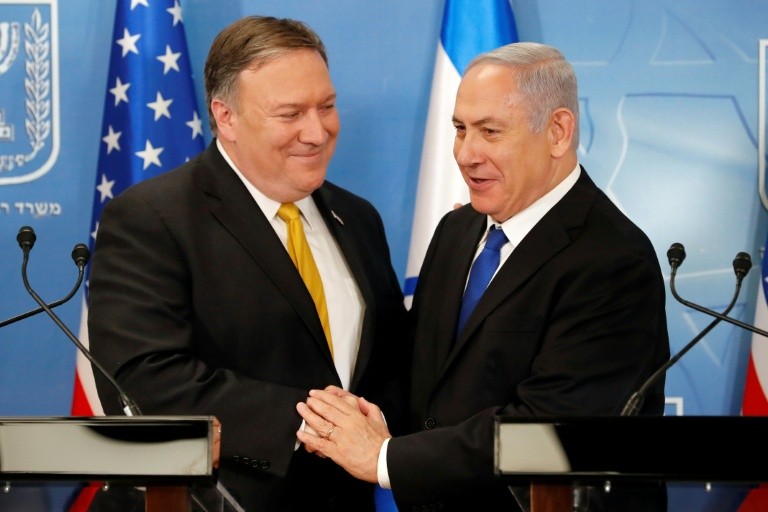 TEL AVIV – Secretary of State Mike Pompeo on Monday vowed to Prime Minister Benjamin Netanyahu that the U.S. was committed to defending Israel on a number of fronts, including confronting Iranian aggression and fighting anti-Israel bias at the UN.

Pompeo said his country would work to curb “the totality of the Iranian regime’s threats through maximum pressure,” according to a State Department statement released after the meeting.

The United States was firmly committed “to Israel’s security and absolute right to self-defense,” the statement said

“Secretary Pompeo noted the strength of the US-Israel alliance and our multifaceted cooperation. He reiterated America’s resolve in confronting the totality of the Iranian regime’s threats through maximum pressure,” it added.

During their closed door meeting in Brussels, Netanyahu was said to have told Pompeo that Israel would act militarily against Hezbollah if Lebanon failed to confront the Iranian proxy terror group.

The meeting comes on the heels of reports that Iran has stopped shipping weapons to Hezbollah via Syria and is now doing so using direct flights to Lebanon using civilian cargo aircraft.

The prime minister also updated Pompeo on developments along the northern border, in which the IDF launched an operation to destroy a series of subterranean attack tunnels dug by Hezbollah into Israeli territory. A statement by the Prime Minister’s Office said the tunnels constituted “a gross violation of Israeli sovereignty” and a UN resolution marking the end of the 2006 war with Lebanon.

“This morning the IDF began Operation Northern Shield, the goal of which is to uncover and neutralize terrorist tunnels from Lebanon,” Netanyahu said.

“Whoever tries to attack the State of Israel will pay a heavy price,” he added.

He said the operation was “complex,” but added that it had so far been successful.

“We are taking determined and responsible action in all sectors simultaneously. We will continue with additional actions — open and covert — in order to ensure the security of Israel,” the prime minister said.

Iran on Sunday vowed it would continue to develop its missile program after Pompeo accused Tehran of conducting tests of a medium-range ballistic missile capable of “carrying multiple warheads” that could strike “anywhere” in the Middle East and even parts of Europe.

“Missile tests … are carried out for defense and the country’s deterrence, and we will continue this,” Brigadier-General Abolfazl Shekarchi, spokesman for Iran’s armed forces, was quoted as saying by the semi-official Tasnim news agency, according to a translation by Reuters.

“We will continue to both develop and test missiles. This is outside the framework of (nuclear) negotiations and part of our national security, for which we will not ask any country’s permission,” Shekarchi said.