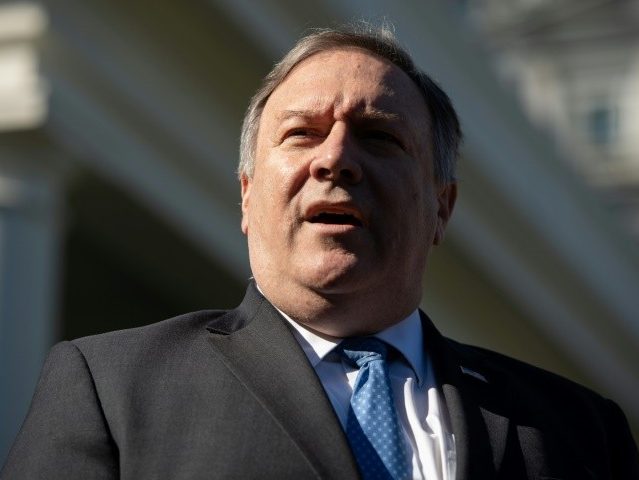 Secretary of State Mike Pompeo penned a no-holds-barred editorial for the Wall Street Journal on Tuesday in which he defended President Donald Trump’s approach to the relationship between the United States and Saudi Arabia in the wake of writer Jamal Khashoggi’s murder.

Pompeo labels critics of the president hypocrites and opportunists who misunderstand America’s interests in the Middle East.

The key passage of Pompeo’s op-ed lashes out against those dwellers in the “salons of Washington” who are primarily interested in undermining the U.S. relationship with Saudi Arabia and its allies, boosting Iran’s interests, and defending former President Barack Obama’s Iran-centric policy:

Is it any coincidence that the people using the Khashoggi murder as a cudgel against President Trump’s Saudi Arabia policy are the same people who supported Barack Obama’s rapprochement with Iran—a regime that has killed thousands world-wide, including hundreds of Americans, and brutalizes its own people? Where was this echo chamber, where were these avatars of human rights, when Mr. Obama gave the mullahs pallets of cash to carry out their work as the world’s largest state sponsor of terrorism?

Saudi Arabia, like the U.S.—and unlike these critics—recognizes the immense threat the Islamic Republic of Iran poses to the world. Modern-day Iran is, in Henry Kissinger’s term, a cause, not a nation. Its objectives are to spread the Islamic revolution from Tehran to Damascus, to destroy Israel, and to subjugate anyone who refuses to submit, starting with the Iranian people. An emboldened Iran would spread even more death and destruction in the Middle East, spark a regional nuclear-arms race, threaten trade routes, and foment terrorism around the world.

Pompeo extended his critique to those who used Khashoggi’s murder as a launch pad for attacks on the Saudi-led military intervention in Yemen, castigating them for ignoring the foul deeds perpetrated by Iran and its insurgent allies, the Houthis:

One of Mohammed bin Salman’s first acts as Saudi crown prince was an effort to root out Iran’s destabilizing influence in Yemen, where the Tehran-backed Houthi rebels seized power in 2015. Tehran is establishing a Hezbollah-like entity on the Arabian Peninsula: a militant group with political power that can hold Saudi population centers hostage, as Hezbollah’s missiles in southern Lebanon threaten Israel. The Houthis have occupied Saudi territory, seized a major port, and, with Iranian help, improved their ballistic-missile targeting so that they can shoot at Riyadh’s international airport, through which tens of thousands of Americans travel. Meanwhile, Tehran has shown no genuine interest in a diplomatic solution to the Yemen conflict.

The secretary noted America has “taken many steps to mitigate Yemen’s suffering from war, disease, and famine,” including humanitarian aid packages and efforts to “improve Saudi targeting to minimize civilian casualties.”

“Iran has no interest in easing Yemen suffering,” he pointed out by contrast. “The mullahs don’t even care for ordinary Iranians. The Kingdom of Saudi Arabia has invested billions to relieve suffering in Yemen. Iran has invested zero.”

Pompeo condemned the killing of Khashoggi as “fundamentally inconsistent with American values” and pointed to visa restrictions and the U.S. Treasury sanctions announced on November 15 as strong indications of the administration’s disapproval. He contended U.S. regional interests nevertheless align more strongly with Saudi Arabia than its adversaries and the United States has far more influence with the Saudis to encourage positive reforms than it has with their adversaries, most certainly including Iran.

Citing former U.N. Ambassador Jeane Kirkpatrick’s famous admonition that “liberal idealism need not be identical with masochism, and need not be incompatible with defense of freedom and the national interest,” Pompeo said the Trump administration pursues a “pragmatic – and correct – approach to the U.S.-Saudi relationship today.”

Pompeo could have quoted Kirkpatrick at greater length if he wished, because one of her key lamentations in 1979 was the Carter administration’s tendency to get rolled by ambitious totalitarian thugs who knew how to spout the language of classical liberal reform and “democracy,” which Carter liberals mistakenly believed were inextricably linked. Her critique of Carter’s blunders in Nicaragua and Iran perfectly anticipated the Obama administration’s catastrophic misreading of the “Arab Spring” as a flowering of enlightened democracy instead of the Islamist takeover it was.

Does this paragraph from Kirkpatrick’s essay sound like it was written 40 years ago, or 40 minutes ago?

Although most governments in the world are, as they always have been, autocracies of one kind or another, no idea holds greater sway in the mind of educated Americans than the belief that it is possible to democratize governments, anytime, anywhere, under any circumstances. This notion is belied by an enormous body of evidence based on the experience of dozens of countries which have attempted with more or less (usually less) success to move from autocratic to democratic government. Many of the wisest political scientists of this and previous centuries agree that democratic institutions are especially difficult to establish and maintain-because they make heavy demands on all portions of a population and because they depend on complex social, cultural, and economic conditions.

Kirkpatrick’s warning against throwing away U.S. alliances with unpleasant regimes in a fit of moral theatrics, opening the door for America’s adversaries to dominate the Middle East and indulge far worse horrors, perfectly anticipated what the most energetic critics of Trump’s Saudi policy seem determined to engineer. A Middle East dominated by Iran and its allies and firmly allied with Russia and China would be far from a human rights paradise. For that matter, why are so many outspoken humanitarians and advocates of democracy willing to support Iran overthrowing the internationally recognized government of Yemen and replacing it with a virulently anti-American, stridently Islamist insurgency?