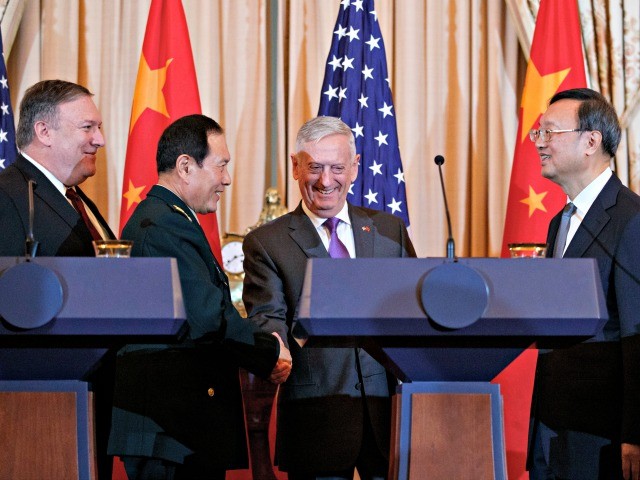 Secretary of State Mike Pompeo and Defense Secretary Jim Mattis met with their Chinese counterparts Friday at the State Department, with both sides expressing hopes for a cooperative relationship, but also airing significant differences.

In many ways, it embodied the Trump administration’s new maxim with China: Competition does not mean hostility.

In a nearly 40 minute press conference after a meeting that ran a bit longer than expected, both sides discussed where they saw areas of agreement and disagreement. While there were some notes of harmony, there was a lot more discord.

The U.S. side began with Pompeo listing areas of potential cooperation. He said North Korea was an area of cooperation where China could help achieve “meaningful breakthroughs.”

He also said he hoped to see cooperation from China in addressing Iran’s nuclear missile programs and other malign activities. “Bringing Iran’s oil export revenues to zero is a critical component of this campaign, and we discussed this today,” he said.

But the “significant differences” included China’s emplacement of military weapons on islands and other land features in the South China Sea that are also claimed by multiple other East Asian nations, China’s attempts to strip away Taiwan’s diplomatic allies, and its repression of religious minorities.

Despite those differences, Pompeo said the U.S. is “not pursuing a cold war or containment policy with China. “Rather, we want to ensure that China acts responsibly and fairly in support of security and prosperity of each of our two countries,” he said.

Pompeo and Mattis meet with their Chinese counterparts at the State Department.

Pompeo: “The United States is not pursuing a cold war or a containment policy with China.” pic.twitter.com/wy1zjjW8kM

China’s foreign minister began that country’s portion of the press conference with areas of disagreement with the U.S.

Director of the Office of Foreign Affairs of the Central Commission of the Communist Party of China Yang Jiechi called the discussions “candid, constructive, and productive.” But he said China is “firm” on proceeding as a socialist nation with Chinese “characteristics,” and that it is not intended to “challenge or displace anyone.”

He also said China was “firmly resolved to safeguard its sovereignty and [territorial] integrity,” going straight to what China considers its most “sensitive” issue with the U.S. — Taiwan.

“Taiwan independent forces and their separatist activities” posed the biggest threat to peace and stability in the Taiwan Strait. “The U.S. should recognize it, clearly,” he said, urging the U.S. to “cautiously handle Taiwan-related matters.”

On the South China Sea, Yang defended building military facilities on some islands as necessary in response to “possible threats from outside,” without elaborating on those threats.

He also suggested that the U.S. was militarizing the region by conducting freedom of navigation operations in the South China Sea.

On the Iran nuclear deal, Yang said it needed to be “implemented and observed,” and reaffirmed China’s commitment to the denuclearization of the Korean Peninsula and said China would continue to “enforce strictly” relevant United Nations Security Council resolutions. He said both sides exchanged views on Afghanistan and other regional and international issues, and agreed to “step up communication and coordination and play a positive role in seeking proper settlement to relevant issues.”

Mattis reiterated the U.S. stance that all parties adhere to international law when it comes to territorial disputes in the South China Sea, but noted that the U.S.-China military relationship could serve as a source of stability between the nations. His counterpart, Minister of National Defense of the People’s Republic of China General Wei Fenghe echoed those remarks.

The Chinese tone became more pointed, however, during the question and answer session with journalists, who honed in on areas of disagreement.

Yang, the Chinese foreign minister, said he “made it clear” to the U.S. that it should stop sending ships and aircraft close to “Chinese islands” in the South China Sea. He also said Taiwan is an “inalienable part of the Chinese territory.” In regards to Chinese treatment of religious minorities, he said, “Foreign countries have no right to interfere.” He said he hoped the U.S. would “stop interfering in China’s internal affairs.”

Wei, the defense minister said Taiwan is an “inseparable” part of China, and if China’s territorial integrity is under threat, it would reunify Taiwan “at any cost, just like what the U.S. side had in Civil War.”

Mattis remained mostly straight-faced and expressionless throughout the conference. Pompeo wielded a tight-lipped smile while listening to his counterpart at times.

Friday’s meeting was the second time the leaders of the State and Defense Departments met with their Chinese counterparts for the U.S.-China Diplomatic and Security Dialogue, put into place by President Trump last year.

Yang said he hoped the issues in U.S.-China economic and trade relations could be resolved through dialogue and consultation, and that a trade war would only “end up hurting both sides and the global economy.”

“I, for one, believe that our friendship has sunken deep within the hearts of our two peoples, and will grow into a big tree with big foliage. The further development of China-U.S. relations will, for sure, give our two peoples a greater sense of gain and satisfaction,” he said.

Meanwhile, across town at a think-tank, the tone from Trump’s top trade adviser was notably less friendly

Peter Navarro, speaking at the Center for Strategic and International Studies, blasted China for its aggressive trade practices with the U.S. that hurt American businesses and workers.

He said during a round of negotiations earlier this year, he and other advisers went to Beijing to negotiate with the Chinese. He said they put down a long list of demands. The Chinese refused to acknowledge U.S. concerns.

“What do we hear? ‘We don’t engage in cyber theft, we are the biggest victim of cyber theft, we don’t force technology transfers.’ How do you have a deal with somebody if they won’t even acknowledge your concerns? It is Alice in Wonderland,” he said.

He also accused China of trying to continue talking to the U.S. and delay any reforms. “That’s all they want to do. They want to get us to the bargaining table, sound reasonable, and talk their way while they keep having their way with us.”

He also poured cold water on reaching a trade deal when Trump and Chinese President Xi Jinping meet in Buenos Aires, Argentina, later this month for the G-20 meeting. He blasted a “self-appointed group of Wall Street bankers and hedge fund managers” shuttling back and forth between Beijing in hopes of pressuring the White House to end the trade war with China.

“When these unpaid foreign agents engage in this kind of diplomacy — so-called diplomacy — all they do is weaken this president and his negotiating position. No good can come of this,” he said.

“If and when there is a deal, it will be on President Donald Trump’s terms, not Wall Street’s terms,” he said.