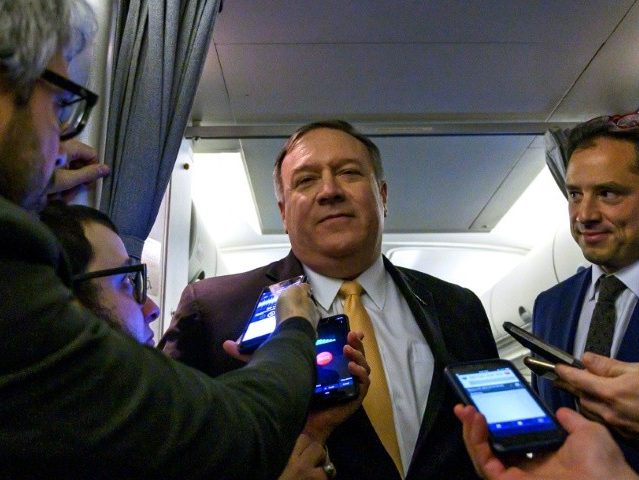 U.S. Secretary of State Mike Pompeo arrived in Jordan on Tuesday, marking the first stop on a tour of eight predominantly Middle Eastern countries to sustain support against Iran’s nefarious activities in the region and assuage allies’ concerns over the White House’s plan to pull American troops from Syria.

During a joint press conference in Amman with his Jordanian counterpart, Pompeo declared:

The most significant threat to the region is Daesh [Islamic State] and the [Iranian] Islamist revolution, and their revolutionary efforts in the region…there is enormous agreement on the risk that that poses to Jordan and to other countries in the neighborhood, and that battle continues.The [U.S.] president’s decision to withdraw [American] folks from Syria in no way impacts our capacity to deliver on that, and you’ll see in the coming days and weeks, we are – doubling not only our diplomatic but our commercial efforts to put real pressure on Iran.

Between January 8 and 15, the Secretary of State will visit Jordan, Egypt, Bahrain, the United Arab Emirates (UAE), Qatar, Saudi Arabia, Oman, and Kuwait during a tour that the Agence France-Presse (AFP) agency described as the top diplomat’s longest trip since taking office last year.

Pompeo is expected to urge America’s allies in the Middle East to ramp up their efforts against Iran’s malign influence in the region, the U.S. Department of State (DOS) announced.

“The counter-Iran coalition is just as effective today, as it was yesterday, and I am very hopeful it will continue to be effective and even more effective, tomorrow,” he proclaimed. “This is not just about a particular tactic that we take among the coalition. This is about a combined understanding that the most significant threat to the region is [ISIS and Iran].”

Jordan’s foreign minister agreed that Iran poses a threat to the Middle East, telling reporters, “We all have problems with Iran’s expansionist policies in the region. We all want to make sure that whatever threat there is mitigated.”

His trip comes on the heels of U.S. President Donald Trump’s decision to withdraw American troops from Syria.

Echoing the president’s decision to slow down the process, U.S. National Security Advisor John Bolton indicated on Sunday that the Trump administration had conditioned the withdrawal on defeating the Islamic State (ISIS/ISIL) remnants in the country and getting assurances from Turkey that the U.S.-allied Kurds it considers terrorists would be safe.

Bolton revealed that a residual U.S. force would remain at the strategically important region of al-Tanf in southern Syria, to counter growing Iranian activity in the area.

The withdrawal announcement raised fears that it would render the Syrian Kurds who helped the U.S.-led coalition decimate ISIS vulnerable to attacks by Turkey and would potentially lead to a revival of the terrorist group.

Trump has stated that he would “not allow Turkey to kill the Kurds,” Bolton said.

Under President Trump, the U.S. has launched a maximum-pressure campaign against Iran, reimposing sanctions suspended under the controversial Iran nuclear deal in 2015 and intensifying other restrictions. Trump pulled the U.S. out of the nuclear pact.