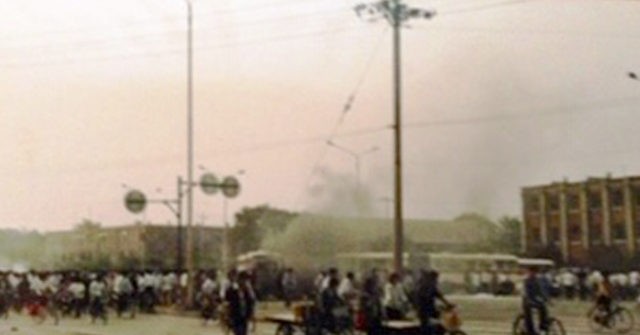 Secretary of State Mike Pompeo used the 30th anniversary of the Tiananmen Square massacre on Monday to remind the world that Communist China’s “one-party state tolerates no dissent and abuses human rights whenever it serves its interests.”

Pompeo issued a statement timed to arrive in China at exactly 12:01 a.m. on Tuesday morning in Beijing, matching up with the date of the Tiananmen crackdown in 1989. The Secretary of State saluted the courage of the “heroic” democracy movement and mourned its violent end:

The hundreds of thousands of protesters who gathered in Beijing and in other cities around China suffered grievously in pursuit of a better future for their country. The number of dead is still unknown.

We express our deep sorrow to the families still grieving their lost loved ones, including the courageous Tiananmen Mothers, who have never stopped seeking accountability, despite great personal risk. The events of thirty years ago still stir our conscience, and the conscience of freedom-loving people around the world.

The Tiananmen Mothers are an advocacy group composed of the family members of people killed in the crackdown. They have been able to positively identify a few hundred of the dead despite the Communist government’s refusal to provide accurate casualty information. Members of the group are harassed and placed under police surveillance each year when the anniversary of the massacre comes around.

“No one from the successive governments over the past 29 years has ever asked after us, and not one word of apology has been spoken from anyone, as if the massacre that shocked the world never happened,” the group said in its 2018 open letter.

Pompeo said hopes that China would be liberalized through its connection to the Internet and international trade systems have been “dashed”:

China’s one-party state tolerates no dissent and abuses human rights whenever it serves its interests. Today, Chinese citizens have been subjected to a new wave of abuses, especially in Xinjiang, where the Communist Party leadership is methodically attempting to strangle Uighur culture and stamp out the Islamic faith, including through the detention of more than one million members of Muslim minority groups.

Even as the party builds a powerful surveillance state, ordinary Chinese citizens continue to seek to exercise their human rights, organize independent unions, pursue justice through the legal system, and simply express their views, for which many are punished, jailed, and even tortured.

Pompeo’s statement concluded with a call for China to “make a full, public accounting of those killed or missing to give comfort to the many victims of this dark chapter of history.”

He also urged Beijing to “release all those held for seeking to exercise these rights and freedoms, halt the use of arbitrary detention, and reverse counterproductive policies that conflate terrorism with religious and political expression.” The latter was a jab at China’s tendency to justify oppressive policies, such as the hideous re-education camps of Xinjiang, as legitimate and necessary counter-terrorism operations.