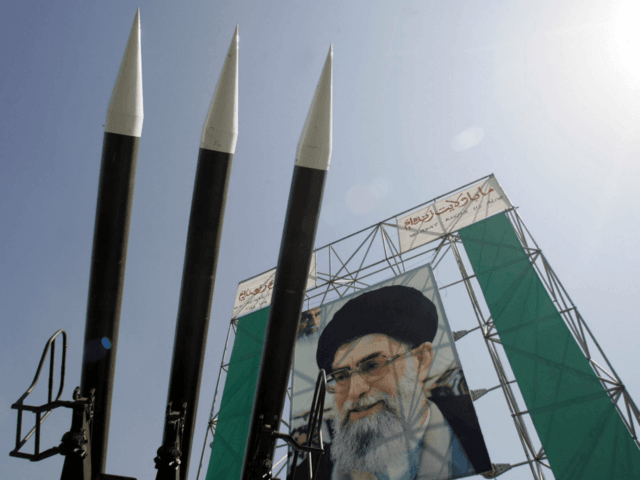 Secretary of State Mike Pompeo addressed the United Nations Security Council on the subject of Iranian missile proliferation on Wednesday.

Pompeo criticized the Iran nuclear deal and urged the U.N. to restore a ban on ballistic missile testing by Iran, challenging the Security Council to “get serious about this real risk from proliferation from the Iranian regime.”

Pompeo began by quoting Islamic Revolutionary Guard Corps (IRGC) airspace commander Amir Hajizadeh’s boast that Iran is now capable of building missiles with a range of over 2,000 kilometers and can hit “enemy bases” within 800 kilometers using weapons which have already been deployed.

“It is clear that the Iranian regime’s ballistic missile activity has grown since the nuclear deal. Iran has exploited the goodwill of nations and defied multiple Security Council resolutions in its quest for a robust ballistic missile force. The United States will never stand for this. No nation that seeks peace and prosperity in the Middle East should either,” Pompeo declared.

The secretary called for the reimposition of U.N. resolutions that limited Iranian missile development from 2010 to 2015, noting that Iran flagrantly violated those resolutions even before they were nullified by President Barack Obama’s nuclear deal. The current U.N. resolutions pertaining to Iranian missiles merely “call upon” it to refrain from the most provocative testing, a call that evidently cannot be heard clearly in Tehran.

“The level of accountability on Iran has diminished while the risk has increased,” Pompeo said.

“Iran’s pace of missile activity, including missile launches and tests, did not diminish since the JCPOA,” he charged, using the formal name of the nuclear deal. “In fact, Iran’s missile testing and missile proliferation is growing. Today Iran has the largest ballistic missile force in the Middle East. It has more than 10 ballistic missile systems in its inventory or in development. It has hundreds of missiles which pose a threat to our partners in the region.”

Pompeo warned that if Iran’s boasts of 2,000-kilometer ballistic missiles are accurate, it has the ability to hit “Athens, Sofia, Bucharest, and other major European cities,” and might be able to target even more remote European capitals.

“Iran has exported ballistic missile systems as well, most recently to Yemen,” he continued. “We have hard evidence that Iran is providing missiles, training, and support to the Houthis, and the Iranian-Houthi missile force is fully engaged. This poses a threat to innocent civilians – including Americans – living in Riyadh, Abu Dhabi, Dubai, as well as people of all nationalities who travel on civilian aircraft in that region.”

Pompeo concluded goodwill gestures from the Western world have been “futile in correcting the Iranian regime’s reckless missile activity and its destructive behaviors.”

“No nation can dispute that Iran is in open defiance of UN Security Council Resolution 2231,” he said, referring to the resolution that endorsed the JCPOA and lifted previous restrictions while also requiring Iran to refrain from the provocative behavior he outlined.

Some have questioned our decision to withdraw from the JCPOA. We reply that it is self-evident why we did so based upon the very conversation we’re having here today. Prior to the deal, Western leaders made grand claims of how the JCPOA would usher in a new era of moderation from the Iranian regime.

Indeed, America’s own president said, quote, “Ideally, we would see a situation in which Iran, seeing sanctions reduced, would start focusing on its economy, on training its people, on re-entering the world community, to lessening its provocative activities in the region.” But what do we actually see?

The JCPOA has without a doubt, to date, shielded the Islamic Republic of Iran from the accountability to the risks it presents to the world.

The Iranian regime is pursuing the same destructive, revolutionary goals that it has for the past 39 years – except now it has more money to achieve them, thanks to the nuclear deal.

Early responses to Pompeo’s speech suggest he faces an uphill climb getting European allies to abandon the JCPOA as America has done, as ABC News reported:

“The JCPOA faces considerable challenges following the withdrawal by the United States and the re-imposition of sanctions against Iran. The E.U. and all 28 member states deeply regretted these U.S. decisions,” said Serge Christiane, a senior diplomat with the E.U. delegation at the U.N. who went on to “express sincere thanks” to Iran “for their unwavering commitment to the nuclear deal.”

Pompeo dismissed the differences as confined to the nuclear deal and said the U.S. could still act with allies and partners to deal with the threat of Iran’s ballistic missiles, even while they remain in the deal.

But that difference could also set up an economic showdown between the U.S. and its allies, with a new European mechanism to allow transactions to skirt U.S. sanctions coming online soon. Pompeo wouldn’t preview any U.S. action against what’s called the “special purpose vehicle,” but said, “To the extent that there are violations of our sanctions, we intend to enforce them with great rigor against any party who is a participant in those violations.”

The U.N. itself has expressed some reservations about Iranian missile proliferation, but just issued the latest in a series of reports expressing satisfaction with Iranian compliance in the JCPOA. The U.N. went out of its way to avoid charging Iran with violating the deal by pumping missiles into Yemen.

The report also saluted European countries for “their initiatives to protect the freedom of their economic operators to pursue legitimate business with the Islamic Republic of Iran, in full accordance with resolution.”

Speaking at the meeting, the Russian ambassador to the UN Vasily Nebenzya said the Iran nuclear deal was fundamental for regional and global security.

He said that Iran continued‎ implementing the JCPOA unconditionally, adding that the UN nuclear body had confirmed Iran’s compliance with the deal in numerous reports.

The Russian envoy also said that Moscow advocated the preservation of the Iran nuclear deal.

He said that the decision by the US to exit the JCPOA and re-impose the unilateral sanctions was a “serious challenge” and not conducive to attaining the goals of the JCPOA.

“We are now facing a paradoxical situation, where one member of the Council is not only openly refusing to implement Resolution 2231, which itself approved, but is also trying to punish all other member states for implementing the decisions of the Council and the Joint JCPOA Commission,” he said.

Iran’s delegation to the United Nations responded to Pompeo’s accusations by charging America is the party clearly in violation of Resolution 2231. Iran asked the Security Council to punish the U.S. for its “unlawful practices and irresponsible parties.”

The Iranian envoy denounced Pompeo’s charges of missile proliferation as “lies, fabrication, and disinformation” and accused the United States of “bullying” Iran.