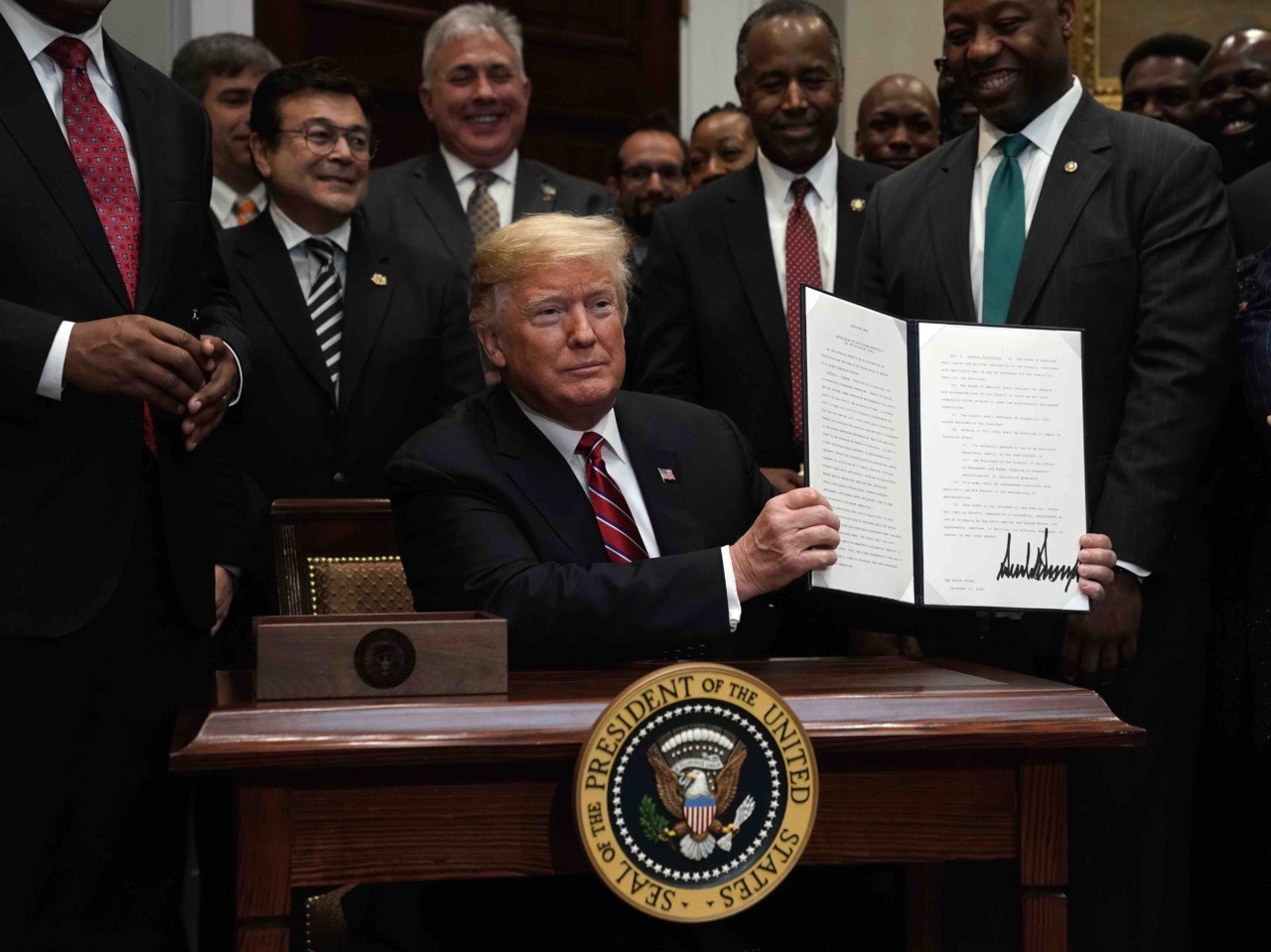 President Donald Trump described his border wall policy last Thursday, derided by Democrats today as “racist” — by noting his opponents once embraced it: “The fact is they have always supported fences and walls and partitions, but you know what? They only don’t want to do it because of me,” he said.

Trump has discovered a winning strategy for the next two years: he can embrace areas of bipartisan agreement, and dare Democrats to disagree.

Prison reform is one example. And there are many similar issues. One is trade, where Trump’s U.S.-Mexico-Canada Agreement is the kind of deal that labor unions demanded but never dreamed was possible. Democrats are threatening to oppose it, but they will only hurt working-class voters by doing so.

Another area of potential bipartisan cooperation is infrastructure. President Barack Obama talked endlessly about building roads and bridges, even if he wasted his “stimulus” on pet projects and government salaries. Trump’s plan targets actual infrastructure needs while bringing in the private sector and spending less federal money. Democrats would find it difficult to reject.

The list goes on. Trump could convene a new debt commission to discuss ways to reduce the deficit — and unlike Obama, he could pledge to follow its recommendations. He could embrace the Ryan-Wyden plan to reform Medicare, which would offer seniors a choice between public and private insurance. He could even propose a  conservative version of “Medicare for all,” not in the socialist mould of Bernie Sanders and Alexandria Ocasio-Cortez, but modeled after the Australian system, also called Medicare, which covers basic health care and leaves bigger expenses to private insurance. (Trump has already expressed a preference for such a system in the past.)

The point is that Trump has an opportunity — both for the sake of the nation and for his own political fortunes — to seize the center. And he can do so not by shifting his own policies to the middle, as President Bill Clinton did in the 1990s, but rather by expressing his own policies in bipartisan terms. If and when Democrats refuse — as they almost certainly will, at least at first — he can present their extremism to the public, and campaign against it in 2020.

At the moment, Trump is facing the political doldrums. After two frenetic years in which he did everything he could on his own, and everything a nervous Republican Congress would allow, he will face a divided Capitol Hill in January and a public that, according to polls, expects him to lose in 2020. He may even be impeached, however unjustly. Regardless, the so-called “resistance” has political momentum and is angling to set the national agenda.

Theoretically, a divided government with a dealmaker as president presents ample opportunities for bipartisan compromises. In reality, Democrats are in no mood to bargain. Incoming Speaker of the House Nancy Pelosi (D-CA) said last week she would not fund part of Trump’s border wall even if it meant legalizing all of the “Dreamers” — illegal aliens brought to the U.S. as minors. Congress seems eager to squander the opportunity it has been given.

Divisions need not be so toxic, as we learned during the second half of Clinton’s first term. Faced with the historic victory of Republicans in the 1994 midterm elections, Clinton tacked toward the middle, reaching agreements with Congress that brought the country balanced budgets and welfare reform. The ideological wings of both parties were frustrated — especially on the left — but Americans were generally happy with their divided yet successful system.

It is important to understand how and why that system has fallen into disrepair. The left’s narrative is always the same — i.e. some version of Howard Zinn’s “people’s history” or Barack Obama’s “long arc of history.” In their view, the country has been burdened from the start by forces of oppression, and the story of the United States is the struggle to overcome those forces. Trump is just the latest counter-revolutionary incarnation, and must be defeated.

When they do — grudgingly — accept the presence of opposition, Democrats do so in a way that affirms the moral rectitude of their own beliefs. Before describing Trump voters as “deplorables,” Hillary Clinton allowed that some of them, at least, were genuinely upset at being left out of the prosperity that Democrats, in their beneficence, had bestowed upon the country. What they needed, therefore, was more of the same redistributive Democratic policies.

But the reality is rather different. The left’s story tends to obscure the good things present at the founding; the great progress made since then; and — crucially — the damage sometimes done by attempts to bring about “social justice.”

The fact is that the left’s own impatience with conventional politics and compromise helped knock the American political system out of balance — and that imbalance will become worse if Democrats sweep the 2020 elections.

The decline in American politics since the 1990s can be traced to the impeachment battle of Clinton’s second term. The Republicans are often faulted for pressing too hard to remove the president from power over crimes committed to cover up an extramarital affair. But in refusing to resign, Clinton established the poisonous precedent that holding onto power was more important than the welfare of the system as a whole. Both parties learned that lesson well.

Clinton’s would-be successor, Al Gore, was tainted by Clinton’s scandals. As a result, Clinton’s “third way” approach to politics had no real successor. George W. Bush styled himself as a Republican version of Clinton, with his “compassionate conservatism,” but the Florida recount amplified the bitter divisions of the Clinton presidency.

The terror attacks of 9/11 — a trauma from which the nation has never fully recovered — briefly restored a kind of national consensus. But Bush’s decision to go to war in Iraq — a war of choice, conceived in ideological, even if well-intentioned, terms — brought back the divisions once more. When John Kerry — considered more moderate than early frontrunner Howard Dean — lost the 2004 election, Democrats began looking to the left for leadership.

Hillary Clinton was irreversibly tainted by her support for the Iraq War — a vote that she had cast in 2002 with the then-reasonable expectation that the country wanted centrist leadership. Barack Obama, who claimed to have been opposed to the war (though he never had the opportunity to vote against it), provided the authenticity that the party’s activists, the “netroots,” were seeking. His victory over Clinton marked a fateful turn to the political fringe.

John McCain offered the Republicans’ best response to an electorate in the mood for change. He promised to end the “permanent campaign” and restore the Clintonesque pragmatism of the 1990s. He might have won, too, if not for the financial collapse of September 2008, which made all the old orthodoxies seem obsolete. McCain claimed that the fundamentals of the economy were strong; Obama had been preaching the need for change for months.

Obama would have been remembered as a successful president if he had merely focused on restoring economic stability, making incremental changes where needed. But he saw a unique opportunity to pass radical policies like Obamacare, which was designed as the battering ram behind which a slew of other sweeping changes would follow. The country recoiled, and elected the Tea Party Republicans to hold Obama and the Democrats in check.

As the willing embodiment of the country’s polyglot identity, Obama could have been a unifying figure if he had followed Clinton’s example and taken his party’s defeat as an opportunity to seek compromises. Instead, Obama followed his radical instincts as a community organizer — and the lessons he had learned watching Mayor Harold Washington in Chicago. He moved even further left, enacting by executive decree what Congress would not pass.

In retrospect, that was the moment American politics, already under strain, snapped. The media applauded Obama, whom it supported almost without criticism or doubt. And had Hillary Clinton won in 2016 as expected, history would have remembered Obama as a pioneer, the founding father of a new, left-wing America who refused to let small things like the Constitution stand in the way of his idealistic plans, regardless of their actual consequences.

But Obama’s decision to break the rules of the game, coupled with his seeming indifference to the actual results of his policies for the middle class that had trusted him, led to a massive backlash that saw the upper Midwest defect to the GOP. The media and the Democratic Party struggled to accept the result because they had convinced each other that Obama’s radical policies and executive abuses were the new norm rather than an unsustainable aberration.

Trump’s stunning victory was portrayed by his critics as a right-wing assault on the democratic system. In reality, it was a restoration of balance. Much of what Trump has achieved since then has merely been undoing what Obama had done. What was unusual was the pugilistic style in which Trump did it — partly a function of his personality, partly a necessary response to the unprecedented hostility of the media and the intransigence of the opposition.

Now that Republicans have lost the House on Trump’s watch, Democrats believe they can defeat Trump in 2020. And, given the balance of political forces, they are right — for now. The big tech companies, scapegoated by the left for allowing the right to flourish in 2016, have changed the rules of the game to avoid a repeat. Hollywood and the media have led a relentless and vicious cultural assault on Trump supporters, casting them as racists and worse.

The danger — for the country, not just for Trump — is that a leftward lurch by Democrats and their “resistance” base in 2020 could swing the political system even further out of balance. Many Trump supporters will feel, after years of phony “Russia collusion” stories and the like, that the system was rigged against him, and them. That could cause many Americans to drop out of political life — and might encourage others to seek redress in extra-political means, something the left has already tried.

After twenty years of bitter partisanship, wars, and economic shocks, America is desperate for stability. In 2016, that meant electing an outsider who could disrupt the far-left elite consensus that was taking the country off a cliff. In 2020, that means electing the leader who can best broker compromises to address our most pressing challenges.

President Trump is better placed than any of his potential opponents to be that leader. He should propose deals, take the moral high ground, and lead America back to success.