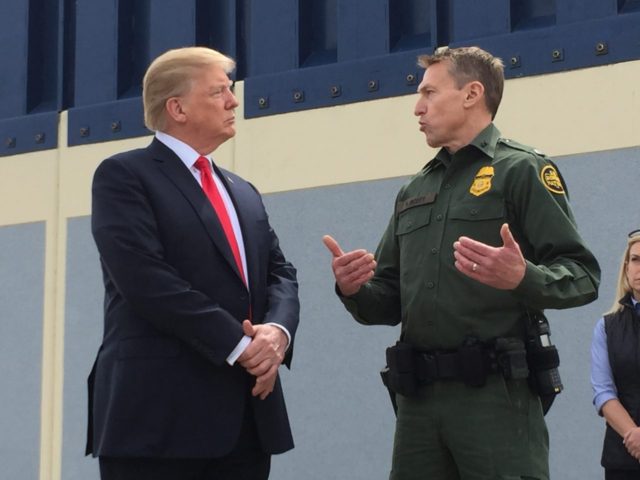 President Donald Trump seems to have scored a significant political win with the announcement Thursday that he will sign Congress’s deal on border security — while at the same time declaring a national emergency to build the portion of the “wall” that the deal would not fund.

If all goes as planned — and that is still a big “if” — Trump will have fulfilled his promise to build a physical barrier on the U.S.-Mexico border, without trading away amnesty.

There are strenuous objections to the bill Trump is about to sign. One is that the amount of money, $1.4 billion, is not only less than what is needed to secure the border, but less than Trump would have received from Democrats before the partial federal government shutdown last December. Indeed, the president of the National Border Patrol Council told Breitbart News Tonight that Congress had ignored what the experts said was the minimum needed.

Moreover, Pelosi and the Democrats have now agreed to fund at least some physical barrier on the border. It is no longer “immoral.”

Pelosi also told reporters Thursday that Trump would set a precedent for future unilateral actions — on guns, for example. The idea that Pelosi — who supported Barack Obama’s unconstitutional actions on immigration — cares about the separation of powers is a joke.

But the risk she describes has been reduced because not only are Trump’s actions lawful — as a gun ban would not be — but because there is also no longer any principled objection to a wall.

Border hawks are more worried about provisions in the bill, such as Section 224(a), that could create a loophole for future illegal aliens to enter the country and avoid deportation.

As my colleague John Binder warned Thursday, the section could “prevent federal immigration officials from deporting anyone who has close contact with [unaccompanied illegal alien minors] who are readily resettled throughout the U.S. with so-called ‘sponsors.’”

That is a real risk. But it will decrease over time, as the wall — or fence — is built. And if the Trump administration succeeds in defending its new policy on asylum — requiring applicants to stay outside the country until their claims are processed — there will be less risk of illegal aliens, whether children or otherwise, using ports of entry to slip over the border and disappear into the interior. It is a big loophole — but it is one that can be closed, gradually.

What is most important is what is not in the border wall deal: any form of legal status whatsoever for illegal aliens already in the United States. That includes the so-called “Dreamers,” the illegal aliens brought to the country as minors, 800,000 of whom have been protected under Obama’s Deferred Action for Childhood Arrivals (DACA). There is no “path to citizenship.” Democrats missed a historic opportunity to trade a border wall for amnesty.

Now Pelosi and her party have lost all of their leverage on immigration reform. Their only hope is to win both the presidency and the Congress in 2020, and pass amnesty then — which may have been their calculation all along.

In the meantime, they have alienated many of the Republicans who might have worked with them, notably Sen. Lindsey Graham (R-SC), who supports the president’s “border deal plus national emergency” approach.

Trump has also given his supporters new reasons to come to the polls in 2020. If they want the wall to continue to be built, and if they want to prevent amnesty, they are going to have to make sure he is re-elected.

And if he wins, Democrats will have no cards to play. By the time immigration reform comes before Congress again, the wall will be in place, and any amnesty to which the politicians agree will be the last.

Which is as it should be. Trump wins.