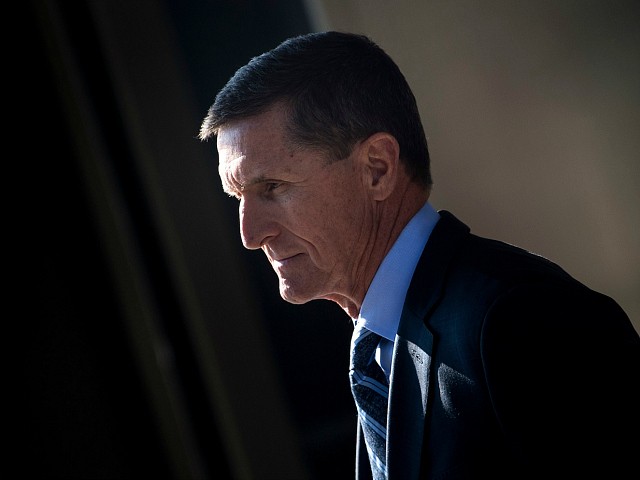 The transcripts strongly suggest that Flynn never lied about anything — to anyone.

Flynn pleaded guilty in December 2017 to having lied to the FBI in a January 24, 2017 meeting at the White House about whether he discussed U.S. sanctions against Russia with Kislyak. He was also forced to resign on February 13, 2017 for “inadvertently” failing to mention to Vice President-elect Mike Pence that he had discussed sanctions with Kislyak.

But the transcripts never show Flynn ever mentioning sanctions against Russia in talking to Kislyak.

Instead, they show that in a phone call on December 29, 2016, Flynn mentioned the Obama administration’s possible expulsion of “some number of Russians” as a response to alleged Russian interference in the election.

The statement suggests Flynn was speaking before Obama announced the expulsion of Russian diplomats and the imposing of new sanctions later that day.

Flynn asked that Russia not escalate the situation into a “tit-for-tat” beyond “reciprocal” action.

There was no mention of sanctions at all, and it now becomes clear why the FBI agents who interviewed Flynn — who took no notes at the meeting — later told then-FBI Director James Comey that they “saw nothing to believe [he was] lying” and that they “saw no change in his demeanor or tone that would say he was being untruthful.”

There is no record at all — aside from Flynn’s guilty plea — that suggests he actually lied about having discussed the sanctions.

But Schiff’s interpretation is absurd. According to him, the discussion of a possible Russian response to diplomats being expelled must have meant discussing “sanctions,” which Flynn may not have known about yet.

Moreover, we know from outgoing National Security Advisor Susan Rice’s memo — also declassified by Grenell — that Comey told President Barack Obama on Jan. 5, 2017, that Flynn had not done anything wrong in conversations with Kislyak.

What followed the meeting between Comey, Obama, Rice, then-Vice President Joe Biden, and others was a series of actions by Comey to trap President-elect Donald Trump and Flynn. Comey even boasted that he had sent FBI agents to the White House to catch Flynn off guard — something that shocked then-Acting Attorney General Sally Yates. Later, Special Counsel Robert Mueller would pressure Flynn into pleading guilty by threatening to indict his son.

There may be other evidence — perhaps in redacted portions of the transcript dealing with a call about a U.N. Security Council Resolution on Israel — to substantiate the claim that Flynn lied to the FBI. Yet we know now he probably did not lie about sanctions on Russia.

To the extent that Flynn discussed the U.S. response to Russian interference at all, it was not in a way that would have justified any kind of prosecution. Nor was he acting as any kind of Russian agent.

The evidence strongly suggests that Flynn neither lied to the FBI nor to Vice President Pence about discussing U.S. sanctions with the Russian ambassador. He was prosecuted and fired because the FBI and the Department of Justice took advantage of an asymmetry of information: they knew what was in the transcripts, and they knew — theoretically — what Flynn had told the FBI agents (though they did not disclose at the time that they believed he had not lied).

Schiff’s attempt to cover for the Russia “collusion” investigation is nothing new; he has lied to the public for years. What is new is clear evidence that there was no legitimate basis for accusing Flynn of any criminal conduct. And what remains to be seen is whether Comey acted alone in pursuing Flynn unjustly, or whether he acted in conspiracy with others, including Obama and Biden.

Notably, Obama likely knew the truth, but never spoke out in Flynn’s defense.