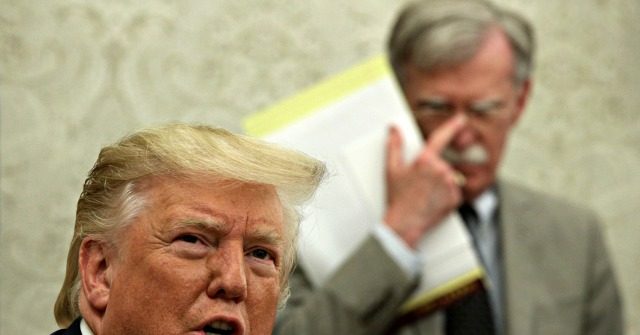 The resignation (or firing) of National Security Advisor John Bolton on Tuesday morning had been in the works for some time, yet was greeted by the media as a sudden event.

Foreign policy hawks mourned Bolton’s departure as a sign of weakening on Iran; likewise, the pro-Iran lobby celebrated it.

Yet neither is correct. President Donald Trump is unlikely to shift his policy of maximum pressure on Iran, because it is something he believes in, and is working.

After Bolton was appointed in March 2018, the U.S. withdrew from the failing Iran nuclear deal and imposed sanctions on the Iranian regime. The administration also carried out crucial pro-Israel policies, such as pulling out of the United Nations Human Rights Council and recognizing Israeli sovereignty in the Golan Heights. (The decision to move the U.S. embassy in Israel to Jerusalem was taken before Bolton’s appointment, and Congress voted to defund Palestinian terror as Bolton took the job).

It is probably true that President Trump was more open to negotiations with the Iranian regime than Bolton would have liked. But it is equally true that Trump is committed to his policy on Iran, because it is working. The regime is struggling to pay its terrorist proxies and is losing international support.

Trump has also made a strong personal commitment to a pro-Israel policy; he mentions it at every opportunity. That is not going to change with Bolton out.

Likewise, there will be little change toward China, where the administration feels it is winning the trade war — and where support is coming in from across the political spectrum. No less than billionaire left-wing financier George Soros backed Trump’s policy in an op-ed in the Wall Street Journal on Tuesday.

Bolton’s hawkish stance toward Venezuela stalled, but that is largely because that country’s opposition is poorly led. The policy will not change.

Where change will happen is in the areas that President Trump feels showing a softer face might help. Foremost among these is North Korea. Bolton’s tough stance was a challenge from the beginning: though Trump and Bolton played good-cop-bad-cop with some success, it became clear that North Korea wanted to see more compromise from the U.S. before making additional concessions. The chances for a deal — good or bad — are now improved.

In Afghanistan, the president roughly favors a similar approach to President Barack Obama, and wants to reach an agreement to allow an orderly U.S. withdrawal. Unlike Obama, he is not willing to negotiate under fire. But he is looking for an exit.

Finally, Trump probably wants a rapprochement with Russia, which Bolton likely did not. Though he will confront Russia where necessary — see Greenland — Trump believes Russia is the key to other deals.

President Trump has a pattern of keeping people around for the unique tasks only they can achieve, then swapping them out for new people.

There is no question we would not have had as strong a policy on Iran without Bolton. It is also undeniably true that Bolton helped reshape U.S. policy towards the United Nations, China, Venezuela, and the Palestinians in ways that were long overdue. And he did it without launching any wars, as critics said he would.

But now that Trump wants to advance on peace talks in North Korea and Afghanistan, he needs a different set of skills. He thinks like a businessman, not a politician: the question he asks is what any employee contributes to the organization now, not whether he should reward past performance.

Look for consistency on Iran, Venezuela, and China. But on North Korea, Afghanistan, and Russia, Trump wants more progress. That is the next advisor’s task.