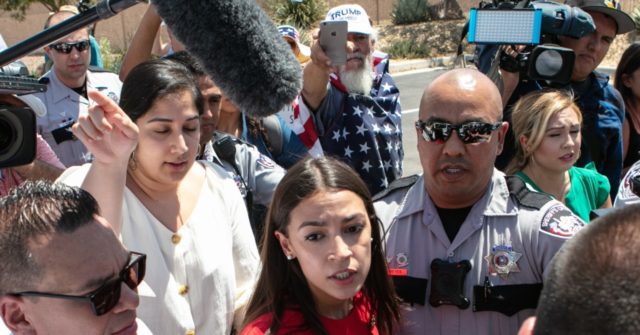 Rep. Alexandria Ocasio-Cortez (D-NY) deliberately distorted what she saw when she toured U.S. Customs and Border Protection (CBP) facilities for detained illegal migrants this week. I know, because I toured a similar facility during the height of the “zero tolerance” policy last year, and saw many of the innocuous things Ocasio-Cortez has inflated into crimes against humanity.

Take, for instance, her complaint that members of Congress had to surrender their smartphones when entering the facilities. Ocasio-Cortez portrayed that as an attempt to cover up abuses, or intimidate her personally.

But there is a very simple reason people are not allowed to take their own photographs: to protect the privacy of the people in the facilities, especially children.

When I joined a group of journalists to tour a shelter for migrant children in El Cajon, California, last June, we had to agree not to take our own photographs. The Department of Health and Human Services supplied us with their own photographer, and provided us with photographs after they had been reviewed. Nothing in the photographs differed in any way from what we saw, except that none of the faces of the children staying at the shelter were visible.

Moreover, the facilities were far from cruel or inhumane. As I wrote at the time:

Once the children arrive — usually brought by U.S. Border Patrol agents — they are greeted in the “intake” office, where they receive any urgent medical care, are assigned a case worker, and are given food, a shower, and new clothing. They are also given toiletries and lessons in hygiene — literally how to flush a toilet, brush their teeth, and operate the shower, which some of the children may have never seen in their lives.

The children receive six hours of education daily, which include lessons in English and physical education. The boys interact with girls who are housed offsite and brought to the shelter during the day to access its services.

They have limited access to telephones to call relatives, both in the U.S. and abroad. They receive therapy, both as individuals and in group sessions. They enjoy field trips to local museums, parks, and the zoo, where they can explore the city beyond the shelter. And they also have social activities, including a recent “prom” for which they dressed up.

Ocasio-Cortez also claimed that women migrants were told to drink out of toilets. One official told the Washington Examiner that Ocasio-Cortez had twisted an actual story in which one woman had mistakenly used water from the toilet because she did not know how to operate the drinking fountain. Keep in mind that many of the migrants are coming from the most underdeveloped parts of Central America, where drinking fountains may not be familiar.

I heard similar exaggerations outside the facility at Homestead, Florida, last week, where activists complained to me that teenagers inside the facility were only allowed two telephone calls per week, and were not allowed to touch personnel working there.

In a facility housing more than 2,000 migrants, two calls per week is a very busy phone schedule. And one of the reasons physical contact between staff and migrants is restricted is to prevent any form of physical or sexual abuse. These restrictions are not unusual at other kinds of detention facilities.

Finally, there is the fact that Ocasio-Cortez claimed the officials at the facilities were “openly disrespectful” towards her and other members of Congress. Officials tell a different story, according to the Examiner — that it was Ocasio-Cortez, in fact, who was behaving in a disrespectful manner.

As a journalist, I frequently encounter situations in which nearly everyone around me disagrees with me (i.e. last week’s Democratic Party presidential primary debate, where I was the only journalist from a conservative outlet, other than Fox News). However, since I want to solicit information, I don’t begin by berating people.

Ocasio-Cortez walked into the facilities having already labeled them “concentration camps,” which by implication means the people working there are Nazi SS guards. Her chief of staff, Saikal Chakrabarti, called them “hateful trolls … with guns” on Twitter yesterday.

It is difficult to trust her version of events when Ocasio-Cortez and her staff have already demonized the people working at the shelters — many of whom, in my experience at El Cajon, were eager to provide the best care for the people in their charge.

A non-partisan group of Hispanic pastors recently toured the same facilities that Ocasio-Cortez visited, and say that they were “shocked at the misinformation” she and other Democrats had provided, according to Fox News.

Rep. Alexandria Ocasio-Cortez is a master at sensationalizing politics. But she is not a credible witness. She came with an agenda, and left with the propaganda that it was always her intention to produce.