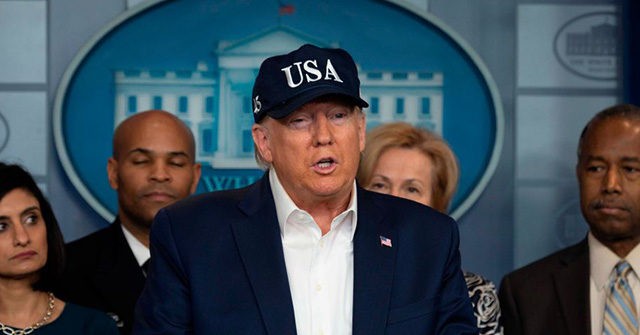 Voters believe putting the interest of Americans first is more important to President Donald Trump than House Speaker Nancy Pelosi (D-CA) when it comes to handling the coronavirus crisis, according to a recent poll.

The Rasmussen Reports poll, done by telephone and online April 20–21, revealed that voters are split along party lines pretty evenly when it comes to who better to handle the crisis — 45 percent say Trump, while 44 percent pick Pelosi — however, 50 percent of respondents believe putting the best interest of Americans first is more important to Trump than Pelosi (47 percent).

The poll found that Republicans are more firmly behind Trump on his handling of the coronavirus and its impact on the country (82 percent) than Democrats are in their support for Pelosi (69 percent).

When it comes to politics, 44 percent said Trump is more concerned about the Republican Party than Americans in general, while Pelosi got a 46 percent response for her putting party above country.

Rasmussen also reported on its poll when it comes to gender, age, and race:

Men and those 40 and over trust Trump more when it comes to handling the coronavirus crisis. Women and younger voters trust Pelosi more.

Fifty percent (50 percent) of whites trust Trump more, compared to only 22 percent of blacks and 40 percent of other minority voters.

Seventy-six percent (76 percent) of Republicans think Trump puts the country first when it comes to dealing with COVID-19. Seventy percent (70 percent) of Democrats say the same of the House Speaker. Unaffiliated voters tend to think both put their political party first.

“With partisan politics influencing most everything in the Trump era, it’s perhaps no surprise that most Democrats are even unwilling to take a potentially life-saving drug to combat coronavirus because the president endorsed it,” Rasmussen concluded. “Democrats remain highly critical of how the government is handling the coronavirus crisis and think a new House oversight committee will make things better. Republicans see more politics ahead.”

The survey of 1,000 likely voters has a margin of sampling error of plus or minus three percentage points.