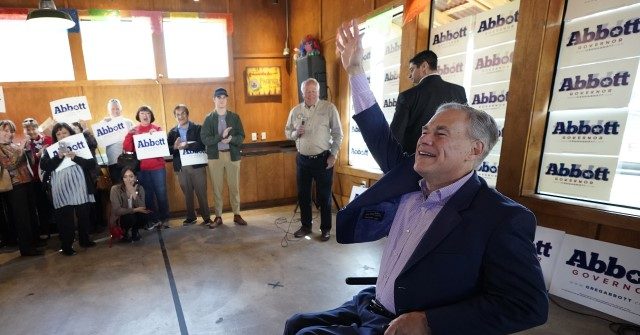 The poll found that 45 percent of the registered Texas voters surveyed said they would vote for Abbott, five percent more than would vote for the Democrat.

Only 40 percent of the respondents said they would vote for O’Rourke, who has tried to rebrand himself after two failed campaign attempts — losing against Sen. Ted Cruz (R-TX) in 2018 and a failed presidential election bid in 2020.

There were also 7 percent of respondents who said they would vote for neither candidate or someone else, and 8 percent said they were “not sure.”

Abbott has come out in front of O’Rourke in all of the most recent polls ahead of the primary elections, set for March 1.

The polls showing Abbott ahead of the Democrat have been continuous; he also has the support of former President Donald Trump. On the other hand, O’Rourke does not want any help from outside sources. Last month the Democrat said during a press conference that he wants President Joe Biden and any other politician from Washington, DC, to stay away from his campaign.

“I’m not interested in any national politician — anyone outside of Texas — coming into this state to help decide the outcome of this,” O’Rourke said, noting that he only wants to “work with” and “listen to” people from the Lone Star State.

At the beginning of the month, a hypothetical head-to-head gubernatorial poll between the two candidates from the Texas Politics Project at the University of Texas at Austin showed Abbott with a ten-point lead ahead of O’Rourke, 47 percent to 37 percent.