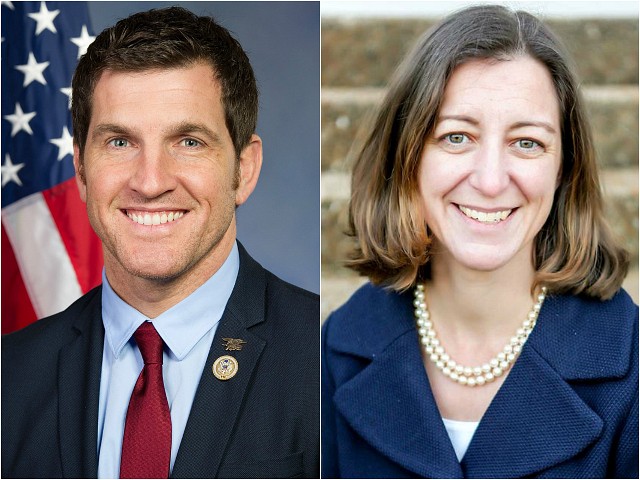 Rep. Scott Taylor (R-VA) leads by seven points in a crucial race for the Republican House majority, according to a poll released on Monday.

Congressman Taylor leads by seven points — 50 to 43 percent — against Democrat Elaine Luria in the 2nd congressional district, according to a Christopher Newport University (CNU) survey released on Monday. Five percent of Virginia voters remain undecided, while the margin of error for the poll is four points, making Taylor’s lead beyond the margin of error.

Taylor also leads by six points — 50 to 44 percent — with “committed voters” or voters who signaled that they will “definitely vote” in the midterm election.

Virginia independent voters also prefer Taylor to Luria by nine points, and Luria only has a modest five-point advantage with women over Taylor. CNU explained that this might result from a “large military presence in the district.”

Dr. Rachel Bitecofer, assistant director of the Wason Center for polling at CNU, said that Taylor has performed even better compared to other Republicans up for re-election this year.

“Unlike his Republican peers in Congress, so far Taylor seems to be weathering a tough electoral environment well,” Bitecofer explained.

Taylor continues to lead in the polls despite a ten percent Democratic advantage in enthusiasm in the Virginia congressional race.

“If Democratic turnout reaches its 2017 level, this race could narrow or even flip unexpectedly to Luria,” said Bitecofer. “Much depends on whether Democratic voters in this district maintain their enthusiasm through Election Day.”

Virginia’s second congressional district is one of the 60+ congressional seats that Republicans must hold so the GOP can continue to control the House of Representatives. Democrats must flip 24 seats to achieve a one-seat majority in the House.