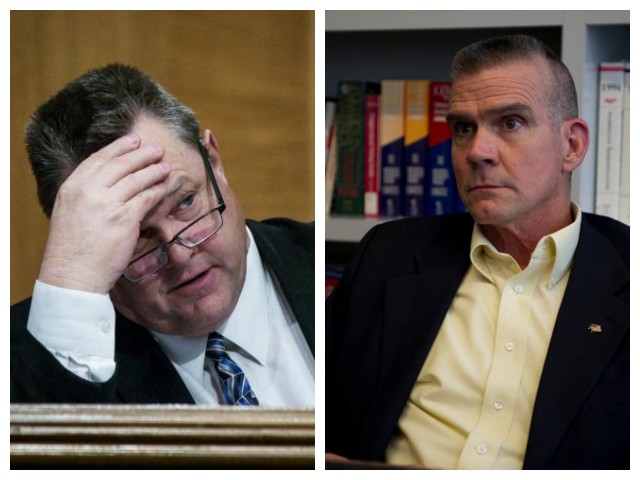 State auditor and Republican Senate nominee Matt Rosendale has taken an 11th-hour lead in Montana over Democrat Sen. Jon Tester (D-MT), surging ahead of the Democrat in the wake of President Donald Trump’s latest rally there on Saturday.

A Change Research poll released late Sunday evening shows Rosendale, at 49 percent, leading Tester’s 46 percent. Libertarian Rick Breckenridge, who dropped out last week and endorsed Rosendale’s campaign saying a Rosendale win is better for the liberty cause than a Tester win, got three percent in this survey.

Tester only leads 51-38 among independents, and that’s probably not enough for him to win. And Montana’s political trends don’t seem to be in his favor.

Change Research is a Democrat polling firm, so for its final poll of Montana to have Rosendale defeating Tester is a major deal. The survey also has Republican Rep. Greg Gianforte (R-MT) ahead of Democrat challenger Kathleen Williams, signaling that the Republicans have locked up another important swing congressional district on their narrow but still possible pathway to holding the House majority. In the RealClearPolitics map of competitive districts, Montana’s at-large congressional district is rated as a toss-up.

If the RealClearPolitics estimation that 195 other districts are likely, lean, or solid Republican is correct, then the GOP would need to win 23 or more of the 38 listed toss-up districts to hold the majority in the House–and being able to slide Montana into the win column means it is even easier for Republicans to do what most analysts thought to be impossible on election day.

Rosendale’s lead in Montana comes in large part thanks to multiple campaign appearances by President Trump for him in the state, the latest and final of which was on Saturday as part of the president’s national tour in the final days leading up to the midterm elections.

On stage at the Trump rally on Saturday, Rosendale made the case that Trump’s policies are on the ballot this year:

Trump made the case against Tester by noting what he did to tank the nomination of Ronny Jackson, his nominee to head the Veterans Affairs department, with phony allegations–a strategy employed more widely by Senate Democrats later, and unsuccessfully, against now Supreme Court Justice Brett Kavanaugh:

Trump hammering Jon Tester in Montana for ‘trying to destroy’ Ronny Jackson for VA Sec. “I’ve never forgotten,” Trump says. “And it’s honestly one of the reasons I’ve been here so much.”

On Breitbart News Saturday on SiriusXM Patriot Channel 125 before the Trump rally, Rosendale emphasized that point: he argued that Tester invented and honed the Democrat tactics used against Kavanaugh’s confirmation.

“He opposed Gorsuch, he opposed Brett Kavanaugh and participated in the character assassinations that the Democrats had reverted to and just not the kind of person that represents the values of the people of Montana,” Rosendale said.