Former Rep. Lou Barletta (R-PA), who is running for governor in Pennsylvania, has about a four-point lead over his closest opponent in the race’s Republican primary contest, according to a recent poll.

While the GOP primary field is packed with more than a dozen candidates, three others, state Sen. Jake Corman, attorney Bill McSwain, and state Sen. Scott Martin, were named as receiving single-digit support in the poll. Twenty-nine percent of respondents said they were undecided or would not vote, and 13 percent said they would choose another candidate besides the five listed. The poll’s margin of error was 2.99 percent.

The Republicans running in the populous battleground state are hoping to replace Gov. Tom Wolfe (D), who is term-limited and unable to seek reelection. The GOP primary winner is expected to face off against leading Democrat candidate Josh Shapiro, the state’s attorney general.

While Barletta, who served as mayor of Hazleton for a decade before joining Congress, has lagged in fundraising, per a recent report from the Philadelphia Inquirer, the outlet also added that “no one disputes that Barletta is the best-known candidate.”

In a memo shared by the Inquirer, Barletta’s campaign manager further noted, “We’ve been strategically spending money because we’ve actually been out campaigning. … All in all, we’re in a really good spot and we will continue to outwork everyone else on the ground amongst the grassroots.” 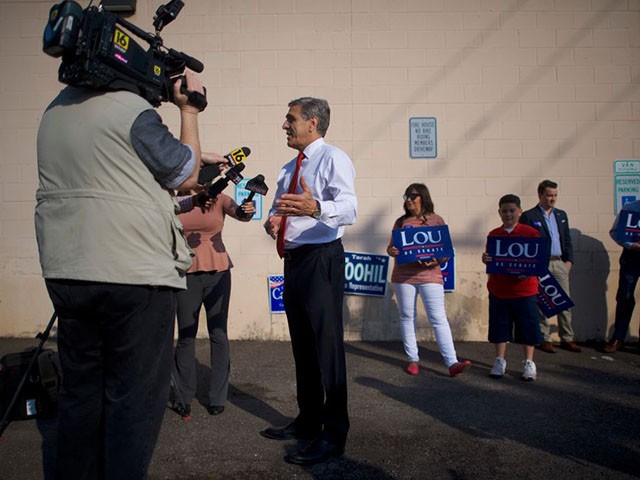 Rep. Lou Barletta addresses the media after casting his vote in the 2018 Pennsylvania primary election for U.S. senator on May 15, 2018, in Hazleton, Pennsylvania (Mark Makela/Getty Images).

One of the standout issues plaguing Pennsylvania is violent crime, particularly in Philadelphia, which saw more homicides in 2021 than any other year on record. Barletta, who gained a reputation for being tough on illegal migration during this tenure as mayor, spoke on the issue of crime to Breitbart News last August and tied it back to the country’s southern border crisis.

“I mean, look at the crime rates in Philadelphia. Look what’s happening. Look at the drugs that are being poured into that city and across Philadelphia,” Barletta said. “When you declare yourself a sanctuary city, you are literally advertising that you can come here and we will protect you and you can go about your business. That will stop immediately when I become governor of Pennsylvania.”