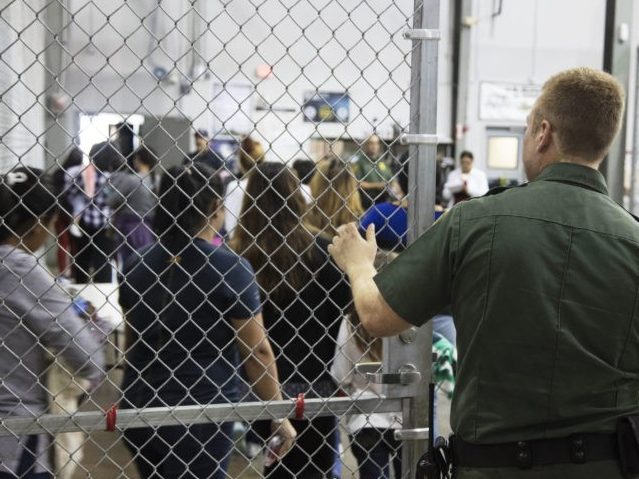 Most Iowa voters say unscrupulous employers deserve most of the blame for illegal migration because they offer jobs to illegals, according to a poll of 801 adults in Iowa.

The result contradicts that frequent claim by business groups that public opposition to immigration is merely a racist-style dislike of migrants.

Also, the public’s decision to blame companies is being fought by business groups, who are spending millions of dollars on attack ads this year which try to shift the blame from their cheap-labor hiring policies to the migrants who illegally sign up for jobs at businesses.

The Des Moines Register poll was taken Sept. 17-20, and asked, “Who do you blame more when illegal immigrants are found working in Iowa — the workers or the employers who hire them?” The data showed:

Across party affiliations, majorities blame those who employ undocumented workers more than they do the workers. Seventy percent of Democrats, 66 percent of independents and 57 percent of Republicans blame the employers.

The same is true of self-identified Trump voters — 64 percent of them blame employers over workers.

But Republicans are more likely to place blame on workers (32 percent) than are independents (13 percent) or Democrats (6 percent).

Overall, the poll showed that “63 percent of Iowans blame employers who hire people in the United States illegally. Sixteen percent blame the workers, and 21 percent are not sure.

The poll was taken amid increased pre-election public concern over illegal migration, especially in Iowa, where an employed migrant was charged with murdering Mollie Tibbetts.

The concern over migration helped Donald Trump get elected, and now his deputies are cracking down on employers who hire illegals, and are deporting more employed migrants who have not committed additional crimes. Trump has also pushed “Hire American” policies and is pressuring companies to hire fewer visa-workers.

Dave Brat, Kris Kobach, Lou Barletta, And Ken Paxton are all in Very Serious trouble or on their way to losing. Even in very conservative areas, their brand of anti-immigrant politics is not working for them. https://t.co/PHnbrS6oHt

Also, business groups are spending heavily during the 2018 campaign to blame migrants for the economic and civic damage caused by companies’ eagerness to attract and employ the cheap-labor migrants. Tibbetts’ alleged killer, for example, worked for low wages at a local dairy in place of European-style cow-milking robots.

Businesses’ focus on migrants was highlighted by America’s Voice, a pro-migration group which normally operates closely with pro-migration employers. A Sept. 24 post, headlined, “GOP’s Divide and Distract Strategy ” declares that donor-funded campaign groups “have placed millions of dollars on the wager that scapegoating immigrants is the path to electoral success.”

begins with the highly politicized death of Kate Steinle, and ends with an ominous hooded figure walking alone on a street brandishing a knife.

The other ad One Nation ran was in support of Republican candidate Martha McSally, which begins with the highly politicized death of Kate Steinle, and ends with an ominous hooded figure walking alone on a street brandishing a knife.

The business-funded campaign ads do not show the economic impact of illegal-immigraiton on Americans’ wages, or do not show how Trump’s “Hire American” policies are helping to nudge up wages for white-collar and blue-collar Americans. al cheap-labor immigration.

The Iowa poll reflects Americans’ ambivalent views on migration, which include sympathy for legal immigrants and even for illegal migrants, alongside a strong hostility for government policies which allow companies to hire cheap-labor migrants in place of Americans.

This ambivalence helps the various pro-migration groups — business interests, progressives, and Democrats — to distract and divide the swing-voting public from demanding politicians reduce immigration. For example, business groups and Democrats fund polls which pressure Americans to declare support for migrants or to submit to the claim that the United States is a “Nation of Immigrants.”

The alternative “priority or fairness” polls — plus the 2016 election — show that most voters in the polling booth put a much higher priority on helping their families, neighbors, and fellow nationals get decent jobs in a high-tech, high-immigration, low-wage economy.

The public’s ambivalence has helped to reduce public recognition and opposition to the Washington-imposed economic policy of economic growth via immigration.

Four million young Americans will join the workforce this year, but the federal government will also import 1.1 million legal immigrants, and allows an army of at least 2 million blue-collar and white-collar visa-workers to work U.S. jobs, alongside asylum-claiming migrants, refugees, and illegal aliens.

That policy shifts wealth from young people towards older people by flooding the market with cheap white-collar and blue-collar foreign labor.