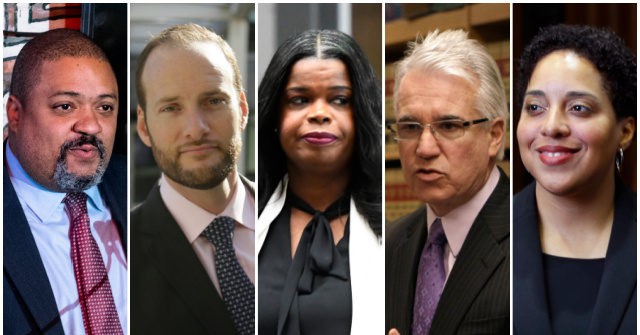 Rasmussen Reports, in partnership with the National Police Association (NPA), found that 58 percent believe a law permitting an appointed state oversight committee with the ability to remove state attorneys from office if they refuse to prosecute violent crimes would improve safety. Only 21 percent disagree and 20 percent are unsure. The Feb. 7 survey polled 982 likely U.S. voters with a  margin of error is ±3 percentage points at the 95 percent confidence level.

More than half — 54 percent — believe safety would improve if there was a law allowing state attorneys general to appoint a special prosecutor if the local district attorney “refuses to carry out their responsibilities.” Twenty-four percent oppose the idea and 22 percent are unsure.

The survey also asked respondents about specific policies from big-city district attorneys and “found widespread opposition.” According to the poll report:

Sixty-nine percent (69 percent) believe Los Angeles will be less safe because Gascon refuses to prosecute minors in adult court no matter the crime, including murder. Gascon’s policy resulted in a gang member who committed a murder at 17 serving only six years of incarceration instead of a life sentence. Sixty-one percent (61%) of voters think Gascon bears responsibility if the killer commits additional crimes.

Sixty-nine percent (69 percent) believe Gardner’s policy in St. Louis, which reduced prosecutions by more than 30 percent even as crime in the city was increasing, will make the city less safe. In one case, a judge released a first-degree murder suspect after prosecutors from Gardner’s office failed to show up for court hearings. Sixty-seven percent (67 percent) of voters believe Gardner bears responsibility for crimes committed by those released due to her non-prosecution program.

A solid majority of each category also believe safety would be improved by a law permitting an appointed state oversight committee with the ability to remove state attorneys who refuse to prosecute violent crime.

“Such a law is supported by 72 percent of Republicans, 48 percent of Democrats and 55 percent of independent voters,” the survey found.