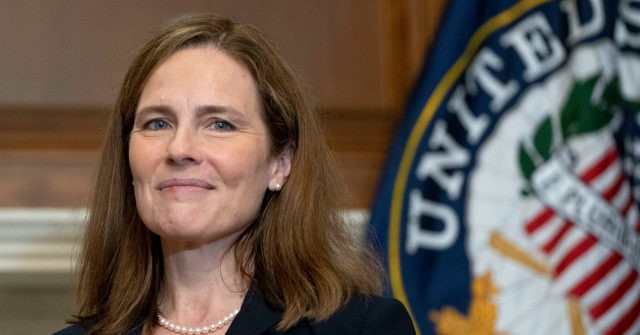 A slim majority of Americans believe the Senate should confirm Judge Amy Coney Barrett to the Supreme Court, including nearly one-third of Democrats, a Morning Consult survey released Wednesday found.

The survey, fielded after the conclusion of last week’s Senate Judiciary Committee hearings, found 51 percent support Barrett’s confirmation. The finding reflects a double-digit jump in Barrett’s favor from the same survey taken in late September, which showed 37 percent back Barrett.

Democrat support has hit an all-time high, as 32 percent express the belief that the Senate should vote to confirm the Supreme Court nominee — an 18-point increase from the 14 percent who said the same in September. Forty-four percent of independents said the Senate should proceed with her nomination as opposed to the 24 percent who said it should not. Support for Barrett has remained consistent among Republicans, increasing from 71 percent in September to 79 percent in the latest poll:

Most of the voting public is under no illusion about what Barrett’s confirmation would mean for the court’s ideological makeup, with 54 percent saying her ascent would make the court more conservative and 23 percent saying it would remain the same (Republican-nominated justices currently have a 5-3 advantage). But voters were less certain about whether that shift is a good thing: 32 percent said it would move the court in the right direction, while 25 percent said it would push the court in the wrong direction.

The findings coincide with this week’s Gallup survey, which also showed 51 percent of respondents indicating support for the Senate confirming Barrett.