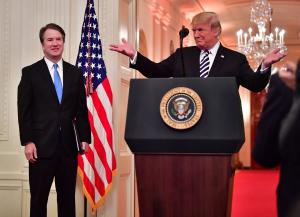 A majority of Americans believe President Donald Trump is doing a “good job” keeping his campaign promises in a poll released days after Brett Kavanaugh was sworn in to replace retiring Justice Anthony Kennedy on the Supreme Court.

According to a CNN poll released on Thursday afternoon, 52% of those surveyed believe Trump is doing a “good job” keeping his 2016 campaign promises compared to 42% who believe he is doing a “poor job.” Another six percent had “no opinion.”

Trump fulfilled one of his most important campaign promises by appointing conservative Justices Neil Gorsuch and Kavanaugh to the Supreme Court. The president also promised to right America’s terrible trade deals in 2016. And after Trump negotiated the new USMCA trade agreement, 43% now approve of how Trump is handling trade, an improvement of eight percentage points from last month.

In addition, 51% of Americans approve of Trump’s handling of the economy while 53% believe the country is doing “very well” or “fairly well.”

During his campaign speeches this week, Trump emphasized that under his administration, “the era of economic surrender is over.”

“After years of rebuilding other nations, we are finally rebuilding our nation,” Trump said.

One of Trump’s major 2020 reelection slogans will be “promises made, promises kept.”

The poll was conducted October 4-7 and has a margin of error of +/- 3.8 percentage points.