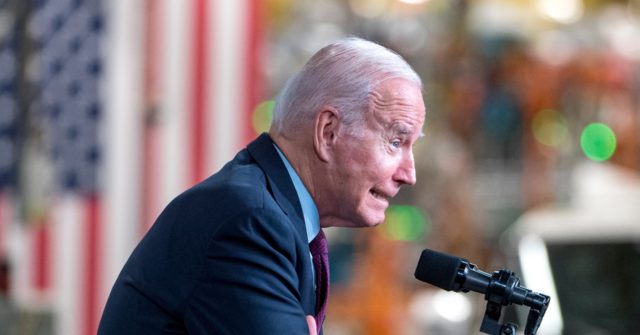 Joe Biden’s approval with voters has hit a new low with polling released Wednesday showing barely 42 percent of the survey’s participants approve of the job he is doing in office.

That is the lowest rating Biden has received in an NPR/Marist poll since he was inaugurated in January.

In the poll as reported by NPR, voters’ top economic issues were inflation at 39 percent, wages at 18 percent, labor shortages at 11 percent and gas prices and unemployment at nine percent.

The result comes on the back of a report released earlier this month by the Labor Department confirming inflation had reached a 30-year high, rising 6.2 percent in the 12-month period ending in October.

It all makes for a dismal set of numbers for Biden as the year draws to a close and voters traditionally hope for some Christmas cheer to spring from the White House and its incumbent.

Even as polling shows voter wariness for the ability of Biden to discharge his duty, Democrats are lining up to say the public just don’t understand his abilities or achievements.

As Breitbart News reported, former Secretary of State Hillary Clinton lamented on MSNBC Tuesday that Americans don’t “appreciate” what she described as President Joe Biden accomplishments as the country continues to reel from inflation and supply chain issues. She told listeners:

Democracy is messy. People got kind of frustrated looking at the messy process of legislation. They didn’t really appreciate that within a year, the Biden administration has passed two major pieces of legislation through both the House and Senate. They’ve passed another major piece through the House that will soon be in the Senate.

By any measure, those are extraordinary accomplishments and they will help millions of Americans with health care and prescription drug prices, as well as climate change and so much else.

But because of the way we are getting our information today and lack of gatekeepers, and people who have a historic perspective who can help us understand what we are seeing, there is a real vulnerability in the electorate to the kind of demagoguery and disinformation that the other side is really good at exploiting.

Despite Clinton’s claim Biden is simply misunderstood, plenty of Americans say inflation is negatively affecting them and blame him directly, a Yahoo News/YouGov poll released this week found.

Over-three quarters of Americans, 77 percent, said inflation is affecting their lives, and a majority across all party lines say the same. That includes 90 percent of Republicans, 79 percent of independents, and 69 percent of Democrats

Respondents also identified inflation as the “most important issue facing America,” even more so than the Chinese coronavirus.