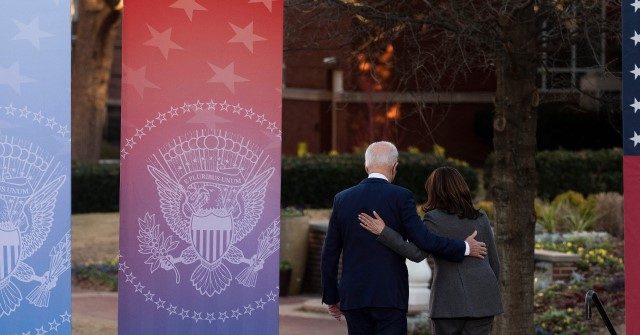 President Joe Biden and Vice President Kamala Harris continue to show low job approval numbers in the latest poll from Redfield & Wilton Strategies after being in office for over a year.

The poll revealed that only 38 percent of eligible voters in the United States approve of Biden’s job performance, compared to the 48 percent who disapproved. Of those who disapproved, 31 percent said they “strongly disapprove.” Additionally, 11 percent of the respondents said they neither approve nor disapprove, while three percent “don’t know.”

The president’s first year in office was plagued with endless bad poll numbers after dealing with the consequences of poor decision-making, especially regarding the supply chain crisis, record-high inflation, and the botched Afghanistan withdrawal. More importantly, most of the president’s key legislative agenda items have stalled in Congress, thanks to the Republican bloc and two Senate Democrats — Sens. Joe Manchin (D-WV) and Kyrsten Sinema (D-AZ) — not willing to give in to the far-left side of their party.

The Los Angeles Times reported Harris has also experienced a “rough first year” in office filled with multiple “political resets” after she had “well-publicized gaffes and high staff turnover.” Reportedly, her political allies and new staff want to use the receding coronavirus as an opportunity for her to tour the country more. While her staff did not want to call this opportunity a “political reset,” they hoped that during her time away from Washington, DC, she can become a “champion” of the few accomplishments the Biden administration has been able to pull off.

The Redfield & Wilton Strategies poll was conducted on February 6. The poll has a sampling size of 1,500 eligible voters in the United States and was taken online. There was no margin of error given.