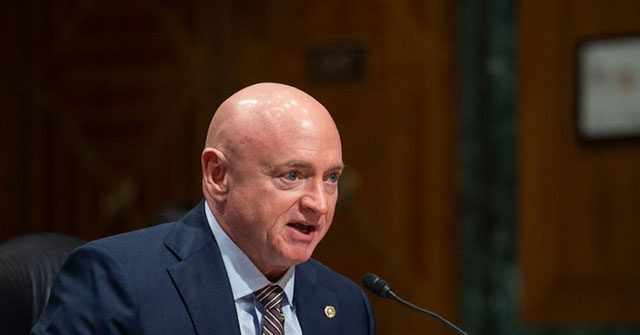 The survey previewed what it predicted will be a “competitive election for U.S. Senate” this year as Kelly (pictured) prepares to defend his seat.

In a race between Kelly and a generic Republican candidate, Kelly leads 42 percent to 38 percent. This is significant, as his lead is less than a percentage point outside the survey’s margin of error. What is more, 19 percent of respondents remain “unsure” who they would support.

Among independents, specifically, Kelly sees 40 percent support to a generic Republican’s 25 percent, but over one third, 35 percent, remain unsure as well.

Four in five (80%) Republican voters say they would support the Republican nominee, and likewise for Democrats in their support for Mark Kelly. But once again, we continue to see signs that Independent voters will be instrumental in deciding Kelly’s fate: 35% of them are still unsure how they plan to vote in the Senate race.

The same survey took a look at the Republican primary race for Senate and found a 47 percent of Republicans remaining undecided. Outside of that, Arizona Attorney General Mark Brnovich leads with 25 percent support among Republicans, followed by retired Air Force Major General Michael McGuire with 11 percent support.

Kelly has remained a supporter of President Biden’s policies as the American people sour on the president and his handling of key issues. In November, for instance, Kelly praised Biden’s vaccine mandate, which the Supreme Court struck down months later.

“We know there’s one thing that’s gonna get us through this completely and that’s to get people vaccinated,” Kelly stated. “So encouraging a business to vaccinate their employees is a good thing.”

Kelly also supported Biden’s multitrillion-dollar welfare package and this month announced that he would support changes to break the filibuster to pass voting bills, touting the importance of “protecting” the vote-by-mail system:

If NASA functioned like the United States Senate, they would never get the rocket off the launchpad.

Read my full statement about why I support passing campaign finance and voting rights reforms with a majority vote: https://t.co/0w2zTIxOTX pic.twitter.com/nUUZ0BdWtF