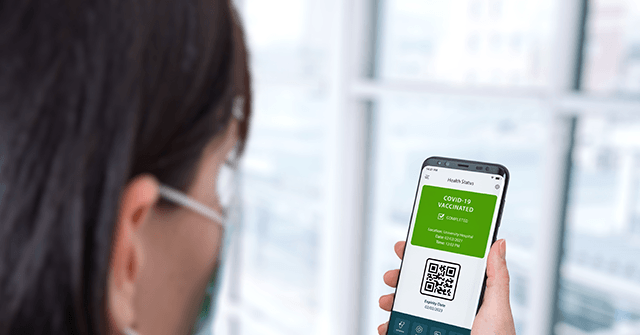 Fewer than half of likely voters consider a vaccine passport a “good idea,” a Rasmussen Reports survey released Thursday found.

White House press secretary Jen Psaki confirmed this week the White House is working with private companies to “make some recommendations” for the development of vaccine passports in the United States. However, less than half of likely voters view this as a “good idea.”

Rasmussen asked respondents, “Is requiring proof of COVID-19 vaccination to return to pre-pandemic activities a good idea or a bad idea?”

Forty-four percent of likely voters said it is a “good idea,” 41 percent said it is a “bad idea,” and 15 percent said they are not sure. Notably, the divide between those who believe it is a good and bad idea is within the survey’s +/- 3 percent margin of error.

Psaki said this week there would be “no centralized universal federal vaccination database” or mandate requiring every American to obtain the credential, but states are beginning to pave their own paths. New York, for example, has already started rolling out a vaccine passport program, the first in the nation, known as the Excelsior Pass.

“The Excelsior Pass will play a critical role in getting information to venues and sites in a secure and streamlined way, allowing us to fast-track the reopening of these businesses and getting us one step closer to reaching a new normal,” Gov. Andrew Cuomo (D) said.

Florida Gov. Ron DeSantis (R), however, balked at the idea of a vaccine passport program in the Sunshine State, calling it a “terrible idea” and vowing to take action.

“I think it’s something that people have certain freedoms and individual liberties to make decisions for themselves,” DeSantis said during a Monday press conference, adding it is “completely unacceptable for either the government or the private sector to impose upon you the requirement that you show proof of vaccine to just simply be able to participate in normal society.”

“You want the fox to guard the henhouse? I mean give me a break,” he said, adding that he believes it would ultimately create problems in the state.