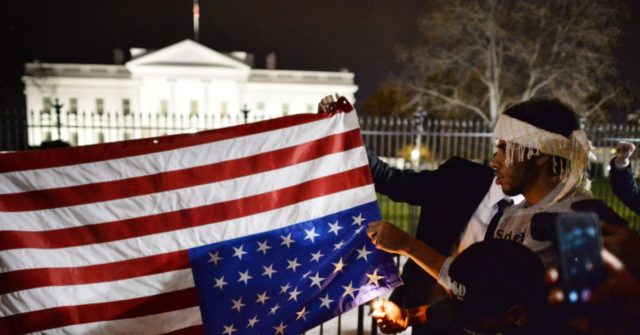 The number of Americans who consider themselves “extremely proud” of their country is at a record low ahead of Independence Day.

A new Gallup poll released on Tuesday found that while 70 percent of all U.S. adults say they are proud to be Americans, only 45 percent say they are “extremely” proud of their country.

This was the second consecutive year in which the number of individuals identifying as extremely patriotic fell below 50 percent. Overall the share of Americans identifying as “extremely” patriotic is now at the lowest level since Gallup began asking the question in 2001.

Gallup found the decline in patriotism to be largely driven by Democrats. Of those identifying with the party, only 22 percent said they were “extremely” proud to be Americans. Similarly “subgroups that typically identify as Democrats — women, liberals and younger adults,” also expressed lower levels of patriotism, according to Gallup.

The new polling confirms trends witnessed among Democrats since President Donald Trump took office. The share of Democrats expressing patriotism plummeted by double digits from 43 percent in 2017 to 32 percent in 2018. Although Democrats have historically reported lower levels of pride in their country, this year’s total of 22 percent is the lowest on record since Gallup began measuring the question.

Republicans, on the other hand, continue to express record levels of patriotism. Gallup found that 76 percent of individuals associated with the GOP identified as “extremely” proud to be Americans—only ten percentage points less than the group’s recorded high in 2003.

Even though Gallup shows a correlation between levels of patriotism and which party controls the White House, the level of pride among Democrats since Trump took office is exponentially low. During the administration of President George W. Bush, the percent of Democrats expressing extreme pride in their country never fell under 46 percent. In comparison, during the presidency of Barack Obama the share of Republicans identifying as extremely proud to be American never dropped below 68 percent.

Gallup conducted the poll between June 3 through June 16 by surveying 1,015 adults from across the country. The poll had a margin of error of +\- 4 percentage points.