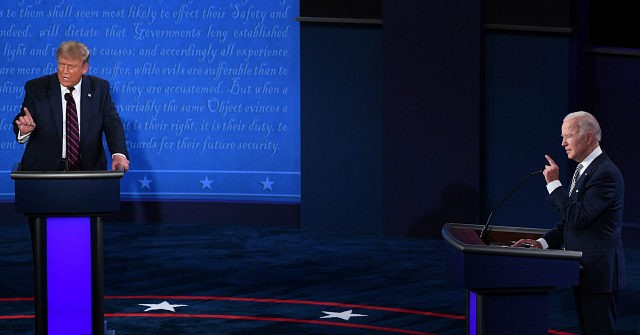 A CNBC/Change Research poll released Thursday showed that the great majority of viewers will continue to support their initial choice for president in November following the first presidential debate between President Donald Trump and former Vice President Joe Biden.

Asked whether their vote had changed after the debate, only two percent of respondents said yes while 98 percent said no.

According to data from the poll, 53 percent of voters who took part suggested that Biden did a better job, compared to 29 percent who claimed Trump did better. Of those surveyed, 77 percent said the first debate between the two candidates did not make them feel proud to be an American.

Despite the first chaotic debate, a 55 percent to 28 percent majority of respondents in the poll stated there should be more debates this year.

The next presidential debate is scheduled for October 15 in Miami and the Commission on Presidential Debates says it will make changes to future formats to avoid a repeat of the first one in 2020.

Fox News’s Chris Wallace, who moderated the first debate and lost control early into the discussion, was met with frustration from voters and social media users around the country after his performance.

President Trump highlighted Wallace’s performance the following night at a rally in Duluth, Minnesota. “Can you believe this guy? I was debating two people last night,” Trump said to a crowd of supporters.

Trump also insisted that Wallace was attempting to “protect” Biden “for Fox” from tough questions throughout the debate.

“I’m so disappointed in Fox,” Trump added. “I’m not just running against Joe Biden, I’m running against the corrupt far-left media socialists and communists in the Democrat party.”

The second debate is set to be moderated by C-SPAN’s Steve Scully, who once interned for Biden’s Senate office in the late ’80s, placing suspicion on whether an apparent bias will arise in the second debate.