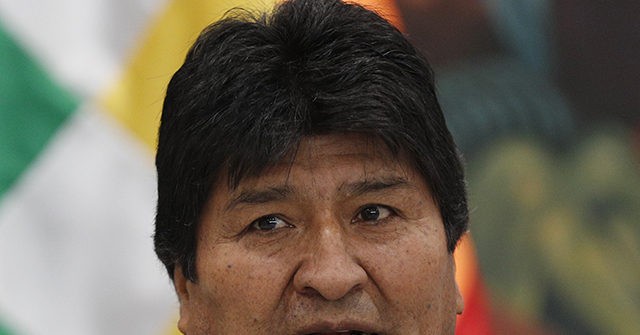 An overwhelming majority of Bolivians believe that the resignation of longtime socialist head of state Evo Morales on November 10 was not the result of a “coup,” according to a nationwide poll published Sunday.

The poll, by the Bolivian firm Mercados y Muestras and taken in conjunction with the newspaper Página Siete, found that 70 percent of Bolivians believe that it is more appropriate to describe what occurred in Bolivia as “social unrest” than a “coup d’etat,” the term Morales and his leftist allies have repeatedly insisted on since he voluntarily resigned and fled to Mexico.

Morales announced his resignation in a live broadcast last month following the revelation in an investigation by the Organization of American States (OAS) that extensive irregularities had occurred in vote tallying following the October 20 presidential election. Upon landing in Mexico, Morales claimed that his security detail had received offers in the tens of thousands of dollars to assassinate him.

Most of the leadership of his party, the Movement Towards Socialism (MAS), also fled the country, leaving the conservative deputy president of the Senate, Jeanine Áñez, as the highest-ranking person in the line of succession. Áñez has since taken over as president and faced an outpouring of violence from MAS supporters and a growing number of Cuban, Venezuelan, and other communist foreign agents active in the country.

Página Siete revealed in its poll that 70 percent believed the nation had experienced social unrest, 25 percent said the resignation of Morales was a “coup,” and five percent did not answer either way.

A coup d’etat is a forced transfer of power in which a rival to the head of state, often from the military, makes it impossible for the head of state to stay in power, either by abducting and removing them, imprisoning them, or threatening them with death if they do not leave. In Morales’ case, the military committed no actions outside of issuing a statement in response to the OAS report stating that, given that the international body found reason to believe the election was illegitimate, Morales should not stay in power without winning a proper election. No military official moved to fill the void when Morales fled the country, allowing the civilian Áñez to take her constitutional position as interim president instead.

Morales served nearly 14 years as president of Bolivia. In 2016, his last term nearing an end, he began campaigning for the removal of term limits in the country. A national referendum to remove term limits from the constitution failed, giving rise to a supreme court case on Morales’ behalf. The nation’s top constitutional court, stacked with Morales supporters from his years in office, ruled that all Bolivians, including Morales, had a “human right” to appear on any political ballot. Morales used the ruling to elbow himself into a place on the 2019 ballot.

The OAS’s evidence of fraud revolved around the bizarre counting behavior of the server holding the national votes. According to the report – a preliminary one expedited in an attempt to quell growing unrest following the October 20 election – the OAS said that the tally appeared to show a dead heat between Morales and leftist rival Carlos Mesa until the votes were diverted out of the government server to a private “mystery” one, which then declared that Morales had won a solid victory preventing a run-off vote.

Morales nonetheless insisted, upon arriving in Mexico, that he was the victim of a “coup” and initially demanded to serve out the presidential term he claimed to have won from this year’s election. The international left came to his aid and proclaimed his voluntary resignation a coup, including leftists in the United States such as Senator Bernie Sanders (I-VT) and Rep. Alexandria Ocasio-Cortez (D-NY).

The leftist president of Mexico, Andrés Manuel López Obrador, offered Morales political asylum. On Sunday, he affirmed that he believed Morales had been removed by force by the military.

“Evo was the victim of a coup d’etat! And from Mexico to the world we say, yes to democracy, no to militarism!” López Obrador said at a rally of supporters in Mexico City. “Morales is our brother who represents with dignity the majority indigenous people of Bolivia.”

López Obrador did not mention the OAS report, nor did he mention the Bolivian government’s revelation last month of audio in which Morales, from Mexico, appears to order socialist community organizers to establish a food blockade around major cities, starving civilians to put pressure on Áñez’s government.

“Brother, don’t let food into the cities, we will really blockade,” Morales says in the audio, offered to journalists by Minister of Government Arturo Murillo. “When they expelled me from Congress in 2002, they did a blockade. And now, they kick me out of Bolivia; there is a blockade. We will win.”

Murillo accused Morales of “crimes against humanity” and suggested he could face legal payback for attempting to starve Bolivians to return to power.

The MAS party ultimately accepted Áñez as president in late November after Morales urged them to reject his resignation and reinstate him. Following her official ascent to the presidency, Morales began asking instead for the right to vote in the upcoming special election to correct the injustice that won him the October 20 vote.

“I have every right to return, I’m not saying to be a candidate but, like any other citizen, to participate in elections,” he said last week.

By Monday, however, MAS party leaders began saying that the would appoint Morales the manager of any campaign in next year’s special election – a significantly more elevated role than that of a mere voter.

“If the government allows him back, he will be our campaign manager,” MAS lawmakers said.