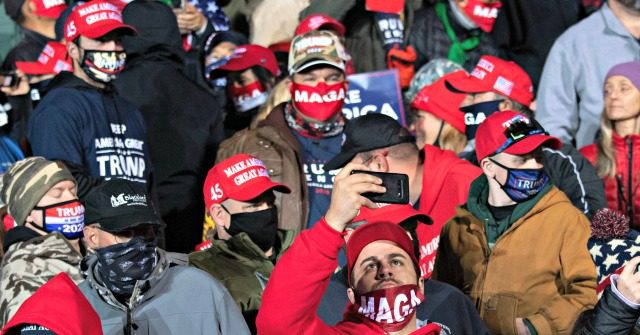 A majority of Pennsylvania voters say they are “better off” than they were four years ago, a USA Today/Suffolk Poll released Wednesday found.

The Gallup Poll has just come out with the incredible finding that 56% of you say that you are better off today, during a pandemic, than you were four years ago (OBiden). Highest number on record! Pretty amazing!

Overall, the survey showed Biden leading in the Keystone State 49 percent to 42 percent. Over a quarter of respondents, 26 percent, named “bringing the country together” as their top issue, followed by the economy (23 percent), and the Chinese coronavirus (22 percent).

Other recent polls out of the crucial battleground state show a tighter race, with Biden and Trump statistically tied, in some instances. The Restoration PAC/Trafalgar Group survey released on Monday, for example, showed Biden’s lead narrowing to 1.1 percent, which is within the poll’s +/- 2.96 percent margin of error:

“It looks like the race is essentially tied across the important upper Midwestern swing states” Restoration PAC founder and President Doug Truax said in a statement.

“We believe President Trump has the stronger message down the stretch that will tip the balance his way,” he added.

Speaking at a rally in Erie, Pennsylvania, on Tuesday, Trump told supporters that if “we win Pennsylvania, we win the whole thing.”