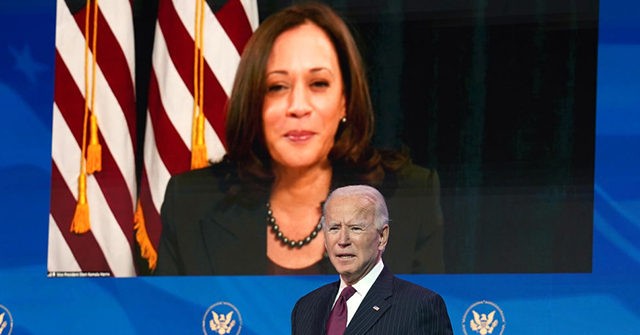 A Rasmussen survey released Tuesday found nearly half of respondents do not believe President Joe Biden is the one making decisions in the White House.

According to the poll, 47 percent of likely voters said “Biden is really doing the job of president,” while 47 percent believed “others are making decisions for Biden behind the scenes.”

When Biden appeared with Harris for the first time after selecting her as his running mate in August, he recounted how, when then-Sen. Barack Obama chose him as his vice presidential running mate, “I told him I wanted to be the last person in the room before he made the important decisions.”

“That’s what I asked Kamala,” Biden said. “I asked Kamala to be the last voice in the room, to always tell me the truth, which she will. Challenge my assumptions if she disagrees. Ask the hard questions. Because that’s the way we make the best decisions for the American people.”

A longtime friend and mentee of Harris’s, Lateefah Simon, told ABC News that while Harris had significant respect for the role she held, “Kamala’s not taking a back seat at all.”

“Nothing about Kamala Harris is number two,” said Simon, a civil rights advocate and elected official in the San Francisco area who first met Harris nearly two decades ago. “She’s a leader in her own right.”

Harris’s deputy press secretary, Sabrina Singh, said Harris is in “a majority” of meetings with Biden “because he wants her there.”

In February, the Department of Defense erroneously called President Joe Biden “VP” in a tweet:

.@VP: Every single person, no matter their gender identity, sexual orientation, race or religious background, deserves to feel safe in the ranks and to have their contributions valued. pic.twitter.com/rDoAPywXOO

“Every single person, no matter their gender identity, sexual orientation, race or religious background, deserves to feel safe in the ranks and to have their contributions valued,” the message from Biden said.

During the campaign, Harris slipped and said the “Harris administration with Joe Biden”:

“As part of our Build Back Better agenda, we will need to make sure you have a president in the White House who actually sees you, who understands your needs, who understands the dignity of your work, and who has your back,” Harris said in September.

Kyle Olson is a reporter for Breitbart News. He is also host of “The Kyle Olson Show,” syndicated on Michigan radio stations on Saturdays — download full podcast episodes. Follow him on Parler.