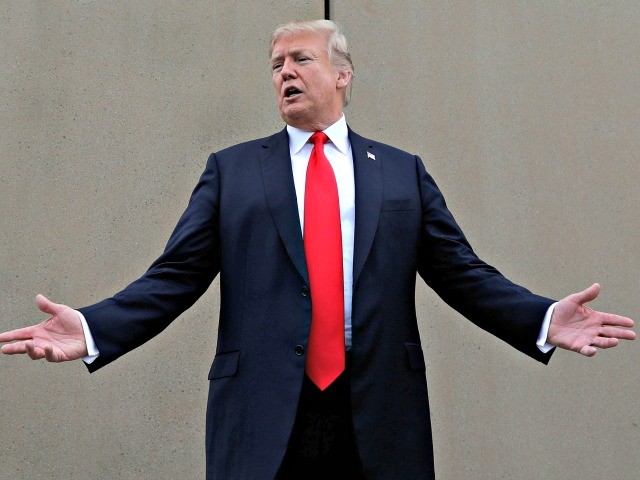 Politico’s White House reporter, Nancy Cook, came out with a curious article on Thursday, laying out how, with Congress unlikely to approve any funding for President Donald Trump’s planned border wall, he should instead go the route of a national emergency declaration, and that it is Breitbart News that has been leading the way in framing the argument for such a declaration.

The White House is finalizing details of a potential national emergency declaration to secure President Donald Trump’s border wall, even as lawmakers are trying to broker an immigration deal that could avert another shutdown in just over two weeks. Trump met with his budget chief, acting chief of staff Mick Mulvaney, Jared Kushner and other top officials, including White House lawyers, on Tuesday to walk through the logistics of such a move. And White House aides have been quietly meeting with outside conservative political groups to build support for the president to take such an action. Those talking points, which emphasize Trump’s legal authority, have begun to show up in such conservative media outlets as Breitbart News.

Breitbart News has certainly been ahead of the curve with the rest of the media on this particular matter. A week ago, on Jan. 24, Breitbart News legal editor Ken Klukowski explained how President Trump has the legal authority–already delegated to him from Congress–to build the wall on the border.

Congress has passed 136 statutory provisions pertaining to presidential emergency powers over the years, delegating significant authority to the president when he declares an emergency. Congress’s research arm notes that in certain types of emergencies, these powers include restricting travel, seizing commodities or property, and regulating businesses.

Not only that, but Congress specifically amended the Posse Comitatus Act – the law that prevents U.S. military troops from operating on U.S. soil, found at 18 U.S.C. § 1385 – in the 2007 National Defense Authorization Act to allow U.S. troops to function domestically under certain circumstances. One of those circumstances is to enforce federal law. Another is that the defense secretary can deploy troops to stop illegal aliens from crossing the U.S. border if the U.S. Department of Homeland Security (DHS) requests military assistance.

Klukowski cites federal law, specifically 33 U.S.C. § 2293(a), in which, once the president declares an emergency, the Secretary of Defense:

…without regard to any other provision of law, may … apply the resources of the Department of the Army’s civil works program, including funds, personnel, and equipment, to construct or assist in the construction, operation, maintenance, and repair of authorized civil works, military construction, and civil defense projects that are essential to the national defense.

Klukowski adds in the next paragraphs:

The next subsection of that law adds that this authority continues until the president declares the emergency has ended, plus an additional 180 days.

Congress passed the Secure Fence Act in 2006, which explicitly authorizes building physical barriers on the U.S.-Mexican border. But even if Congress had not passed that law, the separate law quoted above gives President Trump all the authority he needs to act without further approval from Capitol Hill.

Once President Trump declares an emergency on the border, he can direct Acting Defense Secretary Patrick Shanahan to order the Army Corps of Engineers to begin constructing the wall. Congress has already appropriated $13.9 billion in emergency funds that the Corps can use, much more funding than the president’s $5.7 billion plan calls for.

Additionally, if DHS requests military support, the Pentagon can then also send however many additional troops the president needs to protect the workers and secure the border during construction.

Lawsuits are likely, but it is possible that only Congress itself has standing to sue. The only other injury that any other plaintiff could claim is that they have a legal right to illegally enter the United States. Even the most liberal judicial activist might look askance at such a lawsuit.

It’s hardly just that Klukowski piece that Cook is talking about. On Thursday, Breitbart News’s Michael Patrick Leahy reported on how the nonpartisan Congressional Research Service (CRS) has determined that President Trump can build the wall legally without further congressional authorization. From Leahy’s report on the CRS report:

“The circumstances in which the Section 2808 authority [of Title 10 of the U.S. Code that codifies the National Emergencies Act] could be used to deploy fencing along the border appears to be a question of first impression, and one that is likely to be vigorously litigated,” the CRS report noted.

The report cited two sections of Title 10 of the U.S. Code: Section 2803 and Section 284, which are are separate and distinct from Section 2808, the section of Title 10 that grants presidential authority under the National Emergencies Act.

Section 2803, “provides that the Secretary of Defense ‘may carry out a military construction project not otherwise authorized by law’ upon determining that (1) ‘the project is vital to the national security or to the protection of health, safety, or the quality of the environment,’ and (2) ‘the requirement for the project is so urgent that’ deferring the project ‘would be inconsistent with national security or the protection of health, safety, or environmental quality.’ ”

Section 284, “provides that the Secretary of Defense ‘may provide support for the counterdrug activities or activities to counter transnational organized crime’ of any law enforcement agency, including through the ‘[c]onstruction of roads and fences and installation of lighting to block drug smuggling corridors across international boundaries of the United States.’

The caveat related to Section 284 is that the Department of Defense’s “authority to construct fences appears to extend only to ‘drug smuggling corridors,’ a condition that may limit where DOD could deploy fencing.”

We have a national emergency at the border, the President of the United States ought to declare a national emergency to save roughly 50 American lives per day, or, over 15,000 American lives per year. I encourage the President to use the United States Code 10 Section 284, which empowers the President of the United States to order America’s military to the border, to assist law enforcement agents in the fight against drugs and transnational crime. Interestingly, 10 U.S.C. 284 which has already been approved by Congress, which has already been signed by a president, empowers the Pentagon to deploy both active military and national guard troops to transport personnel, supplies and equipment, establish and operate bases of operation, detect and monitor surface traffic in Mexico. And, within 25 miles of the border in the United States, to construct roads, fences, lighting, to block drugs and smuggling corridors in the aerial and ground reconnaissance.

Breitbart News has published a number of other pieces about this in recent weeks, including video of a Department of Defense official explaining the rationale for such a declaration, polling data showing Trump’s base would gladly support him on such a decision, news on Trump’s comments about his authority to make such a declaration, and congressional leaders discussing the possibility.

As the negotiations have continued between the White House and congressional leaders on this issue–in the leadup, during, and after the longest government shutdown in U.S. history which ended last week–Breitbart News’s Neil Munro and John Binder have also had cutting edge news reporting from inside the negotiating room about the thus-far-failed talks.

That’s not all. The Cartel Chronicles team for Breitbart News on the U.S. border with Mexico, led by editor Brandon Darby, also broke a big story that provides justification for the idea that there is a national emergency on the border: A cartel operating along the Laredo Sector of Texas’s border with Mexico has now been taken over by an actual terrorist, someone convicted of bombing a U.S. consulate.

A verified and convicted terrorist who attacked a U.S. Consulate with a grenade and automatic rifle fire has taken over the ruthless Los Zetas cartel, a group headquartered at the Texas border in the Nuevo Laredo-Laredo metropolitan border area. Nuevo Laredo, Tamaulipas, sits immediately across the border from Laredo, Texas, and is the only urban location along the entire U.S.-Mexico Border that does not have any fencing or constructed security barrier of any kind. The convicted terrorist, Hector Raul Luna Luna, is known as “El Tory” and was convicted in the 2008 terror attack on the U.S. Consulate in Monterrey, Mexico. He was released from prison due to bribes paid by Cartel Jalisco New Generation (CJNG) and has now taken over the dominant faction of Los Zetas, Cartel Del Noreste (CDN), to open up the lucrative and unsecured border corridor into Texas.

It remains to be seen what will happen next. The federal government is only open until Feb. 15 and Democrats on Capitol Hill have flatly refused to negotiate with Trump for the wall, despite some indicating openness to building a wall. Trump will give his State of the Union address on Tuesday evening in the House, with exactly ten days to go before government funding lapses again. If Congress fails yet again to get a deal, though, as Breitbart News has repeatedly shown, Trump still has a path to build the wall. The only looming question then is whether he will do it.