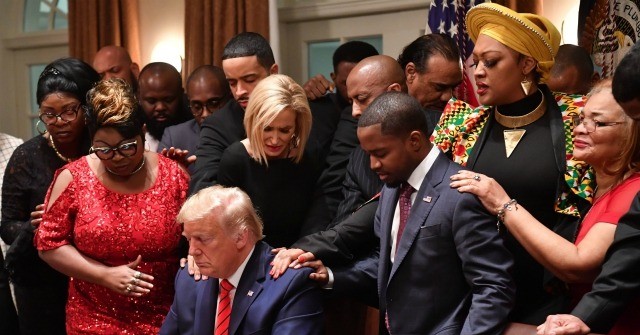 Politico suggested Friday that President Donald Trump bore some responsibility for unrest around the country, claiming he was confronting “a culture war of his own making” in the riots after the death of George Floyd.

The article made no mention of President Barack Obama’s embrace of Occupy Wall Street in 2011; Obama’s support for protests over the killing of Trayvon Martin in 2012; the left’s promotion of the Black Lives Matter movement; or the media’s inflammatory role in any of the above.

The Politico article instead implied that Trump was to blame for national divisions, noting that he had supported calls for justice for Floyd, but had also supported law enforcement, now and in the past:

President Donald Trump is throwing himself into a culture war he has long stoked, and a battle for voters he has eagerly pursued, as he navigates national outrage over the brutal killings of two black men — one at the hands of police, the other at the hands of white civilians.

Trump’s reelection coalition leans heavily on support from law enforcement and the MAGA base, including many supporters eager to promote police officers and immigration agents as heroes. At the same time, campaign aides believe his path to victory in November relies, in part, on drawing in black voters, particularly black men, for whom encounters with police could become matters of life and death.

Long before Floyd’s killing, the president encouraged police to be “rough” with arrestees, railed against NFL players who protested police brutality against unarmed black men during the national anthem, refused to intervene when Justice Department officials declined to bring charges last July against police officers involved in the 2014 death of Eric Garner and offered one of his first presidential pardons to Joe Arpaio, a former Arizona sheriff convicted of criminal contempt after racially profiling Latinos.

Gallup polls on race relations suggest that they worsened after 2013, a period that coincides with the rise of the Black Lives Matter movement.