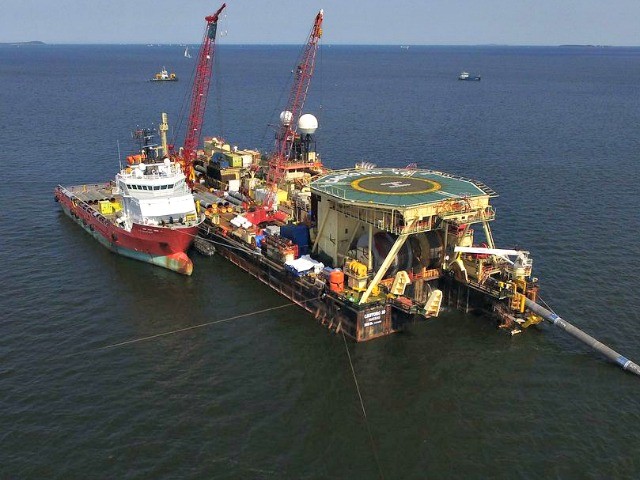 Polish President Andrzej Duda raised alarms Tuesday at the White House to the danger of a gas pipeline from Russia to Germany that President Donald Trump alerted to at a summer NATO summit.

“The biggest threat right now is posed by the construction of Nord Stream II gas pipeline,” said Duda, referring to the natural gas pipeline from Russia to Germany that Trump alerted NATO Secretary-General Jens Stoltenberg to in their first meeting at this summer’s NATO summit. The remarks shook up the summit, and Trump later brought his concerns to German Chancellor Angela Merkel at a private summit meeting.

Duda said he and Trump discussed energy security “at length” in their Tuesday White House meeting ahead of the press conference. He called it unfortunate that Germany and Russia have already begun construction on Nord Stream II. “This investment, without any doubt, threatens energy stability of Europe,” said Duda. “There is a threat of Russian energy domination, especially when Russia mentions that it’s going to build more pipelines — Nord Stream III, Nord Stream IV.”

President Duda warned that Russian energy dominance opens Europe up to “A sudden interruption of supplies.” He said the construction has nothing to do with economic factors, but rather “It was connected only and exclusively with political blackmail.”

Former German Chancellor Gerhard Schröder sits on the Nord Stream II energy company board, a point Trump pointed out to Stoltenberg in their July breakfast meeting.

Poland is constructing an LNG terminal and purchasing LNG from the U.S. in order to protect from Russian energy dominance, according to Duda. “This precisely is a very important element of diversification of gas supplies to our country,” he said. He hoped not only to safeguard Poland through these measures, but also “to transmit gas further to our neighbors through the development of the Three Seas Initiative area through the construction of interconnectors.”

Duda referred to the Three Seas Initiative and hopes for cooperation with the United States in several areas including “transmission of gas in Central Europe along the north-south axis.” He defined the area as “between the Baltic States, though Poland, the Czech Republic, Slovakia, Hungary, Bulgaria, Romania, all the way down to the Black Sea, and then through Croatia and Slovenia to the Adriatic Sea.”

“Poland has worked tirelessly to increase energy independence nationally and across Central Europe,” President Trump added during the press conference. “It is constructing a new pipeline — the highest technology — from Norway to Poland, and it recently built a liquefied natural gas import facility.”

The U.S. first sent shipments of LNG to Poland in 2017. “Soon, our nations will launch a high-level diplomatic exchange on energy security,” Trump said Tuesday.

Presidents Duda and Trump signed a joint statement during their meetings at the White House. That statement committed the U.S. and Poland to “enhance cooperation on energy security” and “ensure better energy diversification of Europe, in which private enterprise should play a key role.” It also committed the countries to “counter energy projects that threaten our mutual security, such as Nord Stream 2.” Each country will “support expanded efforts to enhance energy cooperation and diversification, including nuclear energy.”

“Acknowledging the enormous potential for energy cooperation between the United States and Poland, both sides have committed to establish the ‘U.S.-Poland Strategic Dialogue on Energy,’” the statement said. “Our two nations will continue to support governmental exchanges on energy issues to advance bilateral cooperation and reach a common view on matters of vital interest to both countries.”