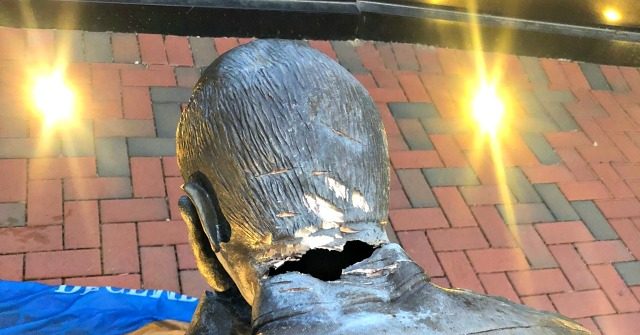 A Dover, Delaware, memorial honoring fallen police officers was found axed on Friday, while two state flags “soaked in urine” were discovered nearby, according to local law enforcement.

Two Delaware state flags soaked in urine were left outside the law enforcement memorial this morning — and the statue’s neck was axed. @DoverDEPolice hasn’t said if they believe this is related to Tuesday’s arrests of #GeorgeFloyd protestershttps://t.co/fV9gPJKKu9

Photos of the memorial show what appear to be blade marks on the neck of a bronze police officer who is kneeling in reflection, his left hand on his forehead. An ax was left on top of the flags, which were laid at the foot of the statue.

The placement of the urine-soaked flag may be a jab at the meaning behind the bronze officer’s pose, which sculptor Neil Brodin said at the time of the memorial’s unveiling shows “a man who is capable and respectful.”

A memorial wall behind the statue, on which is inscribed the names of all the Delaware officers who have died in the line of duty since 1863, was not targeted. Dover Police spokesman Cpl. Mark Hoffman said he believes it’s the first time the memorial has been vandalized.

Gov. John Carney (D) denounced the vandalism, saying the memorial “helps us remember the brave men and women — in Delaware and across our country — who have made the ultimate sacrifice protecting all of us.”

“This kind of vandalism is unacceptable,” added Carney. “Let’s try to treat one another with respect. Ignore the voices who want to divide us up. Working together, in good faith, is the only way to make meaningful progress.”

Delaware Attorney General Kathy Jennings (D) said in a statement that state prosecutors will charge whoever is behind the acts, adding, “I don’t care what you call this; it is reprehensible.”

Gun rights advocate Mitch Denham has set up a GoFundMe with a goal of $25,000 to help restore the memorial.

“I made my name on protest, so I understand the concept of protesting and how it works and how it can effect change,” Denham told Delaware Online. “But I don’t condone destruction as protest and I just don’t think it’s a viable means to get your message across.”

“This memorial isn’t about bad cops, and it’s not celebrating bad police officers who do bad things to people,” Denham added. “Bad [officers] need to be called out in front of everyone and exposed for their wretchedness.”

“We need to support the guys that put on that badge every day to go out and serve and protect the community to the best of their ability,” he added. “That’s what this memorial is about.”

The incident comes as the death of George Floyd, a black man who died in police custody in Minneapolis, has prompted protesters across the United States to tear down Confederate statues.