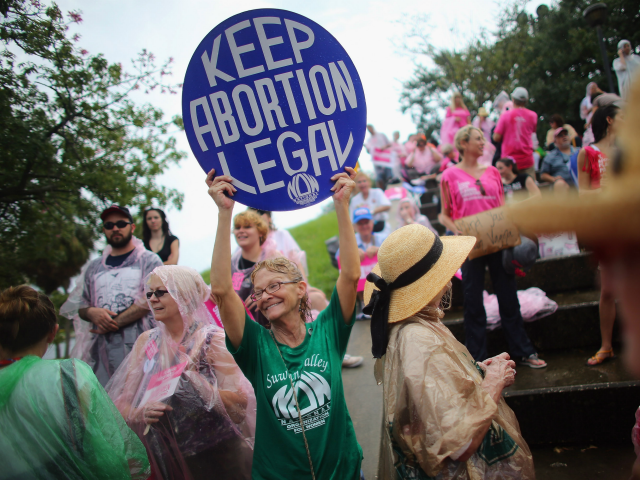 We refuse to let our country become a place where people can no longer access abortion. Today, we launched #CareForAll — a nationwide effort to ensure that abortion is still accessible no matter what happens at the Supreme Court.

America’s largest abortion business said it has been crafting its new “Care for All” plan since President Donald Trump was elected. Fearing that Roe v. Wade– the 1973 Supreme Court decision that invented a right to abortion – is in jeopardy, Planned Parenthood said it will not allow the United States “to become a country where people can no longer access abortion – or where they ultimately lose the fundamental right to decide if or when to become a parent.”

“With the confirmation of Justice Brett Kavanaugh, we are kicking our plan into high gear,” the group announced. “This multi-million dollar, nationwide effort will be working to ensure that abortion is still accessible in the United States, no matter what happens at the Supreme Court.”

The abortion giant’s “plan” mostly involves investing heavily in Democrat-led states that support abortion on demand and have vowed to keep it legal, regardless of what happens on the federal level.

Planned Parenthood’s rage against the Kavanaugh confirmation largely stems from the fact the organization has retained and even enhanced its power through the federal courts, including the Supreme Court – as it has lost significantly in Republican-led state legislatures reflecting the will of the people in those states. In an effort to restock state legislatures with pro-abortion lawmakers, Planned Parenthood has supported many female Democratic candidates for congressional office during this midterm election period.

Planned Parenthood’s new marketing plan says the group will expand its abortion services in states where it will remain legal to create a Regional Access Network which will make abortion-inducing drugs available to women through telemedicine.

Secondly, Planned Parenthood announced it will join with other “coalition partners” to use state policies to develop an “ironclad network of states” that will retain legal abortion.

“We will be working with more than half of the states in the country to push policies to protect, expand, and enhance access to safe, legal abortion,” Planned Parenthood stated. “In addition, Planned Parenthood advocacy organizations will double down and drive robust multi-year campaigns to create policy change in at least 10 of the states that will be key to creating a Regional Access Network for abortion.”

Planned Parenthood said the third feature of its new campaign is “culture change” through the use of celebrities.

The group said it will be working to “destigmatize” or normalize abortion – both in the media and in popular culture – by utilizing its deep networks in the music, fashion, movie, and television industries.

Kristan Hawkins, president of Students for Life of America, said in a statement sent to Breitbart News that, regardless of the features of Planned Parenthood’s new “marketing” plan, ulimately “people don’t want what Planned Parenthood is selling.”

“Planned Parenthood’s latest campaign to keep poorly regulated, highly profitable abortion as its bread and butter is no surprise,” she said, adding that abortion is the “human rights issue of our day,” and that Planned Parenthood’s new marketing strategy “won’t be able to camouflage” its true agenda, which, she explained, is profiting from “ending pre-born life.”

“The abortion industry has hidden behind messaging like ‘choice’ while fighting to be sure that no one has any option but to fund abortion with tax dollars, hear their sales pitch in schools or allow them to avoid health and safety standards that real medical centers follow,” Hawkins added. “But this isn’t going to work long term.”