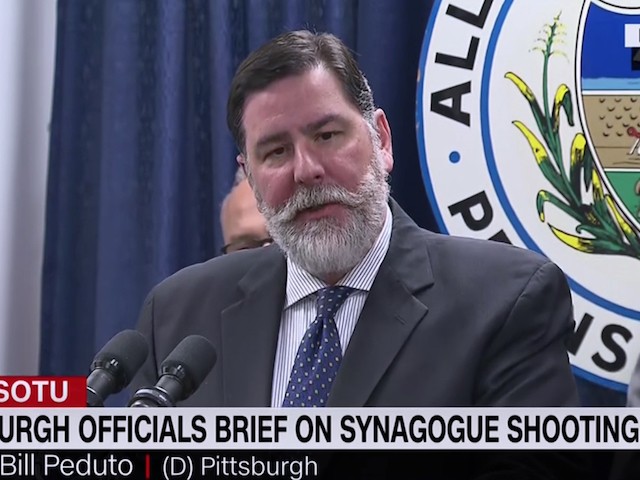 Pittsburgh Mayor Bill Peduto refuses to meet President Donald Trump during his Tuesday visit to the city following a synagogue shooting over the weekend that left 11 dead and several injured.

Peduto called on President Trump to postpone until the funerals of those killed at the Tree of Life synagogue during Saturday prayer services had concluded, stating “all attention should be on the victims.”

“We do not have enough public safety officials to provide enough protection at the funerals and to be able at the same time draw attention to a potential presidential visit,” the Democrat mayor told WPXI. “If the President is looking to come to Pittsburgh, I would ask that he not do so while we are burying the dead.”

“I would ask that White House staff contact the families and ask them if they want the President to be here,” he added.

First Lady Melania Trump, along with senior White House advisers Jared Kushner and Ivanka Trump, are said to be accompanying the president, and are expected to meet with first responders and community leaders.

In a Monday morning interview with CNN New Day host Alisyn Camerota, Tree of Life rabbi Jeffrey Myers refused to blame anyone for the shooting and said he would welcome President Trump to visit the Squirrel Hill neighborhood to aid with the healing process. “I don’t really foist blame upon any person,” Myers told the CNN host. “Hate does not know religion, race, creed, political party. It’s not a political issue in any way, shape, or form. Hate does not know any of those things.”

“The president of the United States is always welcome,” the rabbi said later in the interview. “I’m a citizen, he is my president. He is certainly welcome.”