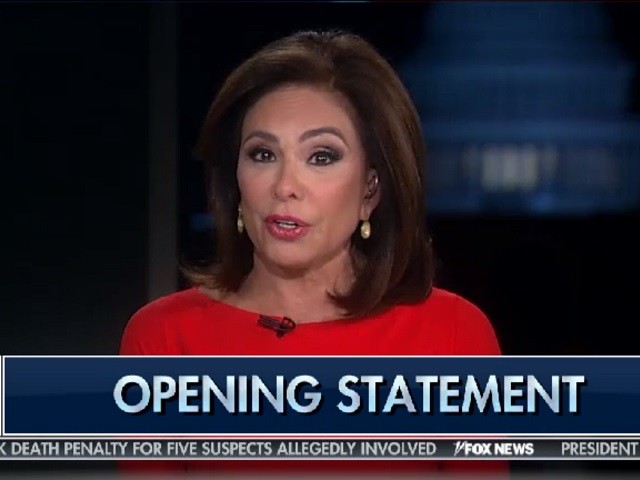 During her “Opening Statement” segment on Saturday, Fox News Channel’s Jeanine Pirro hammered Sen. Kamala Harris for her claim in a congressional hearing that a perception exists that the U.S. Immigration and Customs Enforcement (ICE) agency is like the Ku Klux Klan.

Pirro castigated Harris for making that statement in a line of questioning to acting ICE Director Ronald Vitiello and argued ICE should not be villainized for enforcing the laws on the books.

The “Justice” host argued the proper response for Harris would be to pass legislation in her capacity as a U.S. Senator if she were not satisfied by the laws ICE is mandated to enforce, and that ICE-KKK comparisons were unnecessary.

“Don’t gin up people into a frenzy suggesting ICE is like the KKK with images of burning crosses and lynchings of innocent African-Americans in ikening it to innocent Mexicans and Central Americans,” she said. “You of all people should understand the anger and hate that that conjures up. As a woman who is half African-American, you of all people should understand the history and the role of the KKK played through the Democrat Party. Let me see if I get this right: ICE should be eliminated because it scares people. People who have broken our laws to come here. Many have already exhibited violence along the way.”

She went on to say Harris’ “con” on the illegal immigration issue puts American citizens in jeopardy.

“What you are doing is planting seeds of fear, resistance and resentment against ICE among people who have no right to come here, who have already broken our laws to get here,” Pirro added. “And they’re scared? People should be afraid when they violate our laws. The people though who should be afraid are innocent Americans at risk in sanctuary cities and states where illegals who are also criminals are given safe haven. Your con puts those American citizens in jeopardy. How about having a dose of reality and not your perception nonsense? Take a look at these pictures. Kate Steinle, Mollie Tibbetts, Nisa Mickens, Kayla Cuevas and the scores of American citizens killed by illegals. Your perception of ICE as the KKK is pure insanity. This is America. The law is the law. Respect it. Honor it, fear it. Damn it, fear it. Any questions?