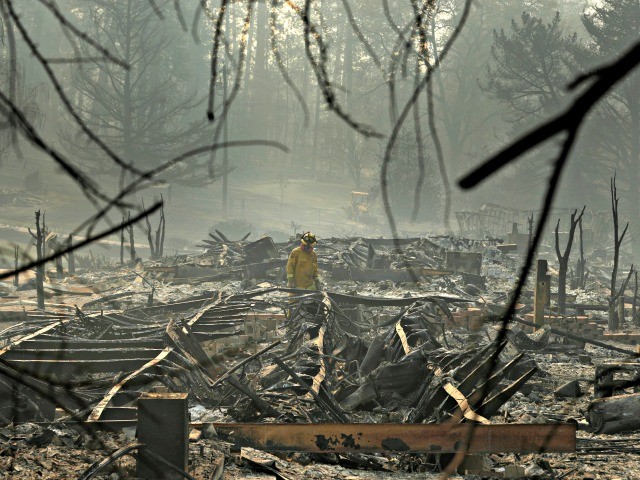 According to news reports, virtually the entire city of Paradise, CA, has been destroyed.  In the words of one now-former resident, the burnt-over town “looked like Iraq.”  Or as a fire official said even more succinctly, Paradise, once home to 27,000 people, is now “Armageddon.”

Of course, the fire that engulfed Paradise is only one of many raging fires in California; as of November 17, the statewide death toll stood at 71—and will undoubtedly go higher.  And property damage is being measured in the many billions of dollars, maybe hundreds of billions.

So we can see: Californians have suffered a clear defeat—a defeat at the hands of nature.

Whoa, the reader might be saying.  Defeat?  Is that really the right word?

And the answer: Sure, it’s exactly the right word.  If you had a house, and now you don’t, you’ve lost something.  You’ve suffered a defeat.  And for those who were alive, and now are dead—well, they’ve lost even more.  Defeated, all.

Moreover, if we follow the principle of John Donne’s famous 17th century devotional, No Man Is an Island, such losses of life are defeats, not just for Californians, but for all of us.  As Donne put it, “Therefore, send not to know for whom the bell tolls, it tolls for thee.”   In other words, as human beings, we’re all in this together, and we all must fear the power of nature—earth, wind, water, and, of course, fire.

So that’s why we build defenses against the elements, including walls,  weatherproofing, and water sprinklers.  And many of those defenses are best maintained at the civilizational level—as buildings and developments with uniform fire codes, as roads that enable first responders to respond, as public works that store and move water, and as public exhortations about fire safety.  As Donne might have put it, If we aren’t looking out for each other, we aren’t looking out for ourselves.

Speaking of the 17th century, it was another Briton of that era, Sir Francis Bacon, who put the upward path of civilization in proper perspective—as a matter of ultimate victory for humanity.  As he wrote, we’re all in a long struggle against the random caprice of nature, and so that’s why we need science and technology.  Indeed, Bacon is remembered as the father of the Scientific Revolution–that is, the organized search for solutions to human problems.

After all, if we have the right science and technology for the situation at hand, we  can win.  And if we don’t, we lose.  So today, if we’re not at risk from, say, polio, that’s because a latter-day Baconian, Jonas Salk, invented the polio vaccine back in the 1950s, and because the political system, ever since, has arranged for the vaccine’s widespread distribution.  Indeed, we can apply this same point to all the inventions and innovations that have improved our personal prosperity, safety, and longevity—a long list!

In fact, we need all of these gains, because, as the famed 20th century scientist Carl Sagan explained, “Extinction is the rule: Survival is the exception.” In other words, from the tiniest virus to the biggest asteroid, nature is always finding some way to kill us.  It’s not that nature is malevolent; it’s just that it’s a different system, not obviously oriented to our flourishing.  So if we want to survive, we have to take affirmative steps to survive—we have to defend ourselves.  There’s a phrase for this: Survival of the fittest.  That is, for the sake of survival, we must adapt, and that means adapting our environment.

To be sure, not everyone agrees with Bacon’s worldview.  Most obviously, green environmentalists view scientific progress with an attitude ranging from skepticism, to suspicion, to outright hostility.  The green have all their arguments, of course, and it’s worth listening to them, but at the same time, it’s worth bearing in mind that in California today, we are seeing some of the results of their thinking.

For example, as Trump has argued, in their opposition to logging, the greens have allowed forests to become denser, and thus more vulnerable to the eventual killer fire.

Moreover, the greens have steadily opposed water desalination on the seacoast that could provide water for firefighters.

So we can see, thanks in no small part to the legal and regulatory structure created by the greens, millions of ordinary people, not just in California, are virtually defenseless against wildfires.

Of course, to the greens, human defenselessness is a feature, not a bug, because for half a century now, they have argued that we have too many people, doing too much damage to the environment.  The greens laid out their argument in books such as The Population Bomb (1968) and The Limits to Growth (1972), and they’ve stuck to those mantras ever since.  For instance, John Holdren, an advocate of radical population reductions, was appointed in 2009 to be President Barack Obama’s White House science adviser.

We can all figure out what happens when the population grows; people move to settle more land.  Oh sure, the additional people could live in center cities, but most people prefer, if they can, to spread out a little—and this is especially true if they have children.  To most folks with families, the idea of a house with a yard is a good thing, not a bad thing.  And yet those new homes and neighborhoods need protecting, too.

Thus the question: Do we wish to protect our population from the threats of nature, or not?

Of course, we can and should have common-sense zoning and smart land-use rules–as well as, of course, overall protection against environmental toxins and poisons–and yet at the same time, we need an orientation toward making room for population growth.

That is, we should figure that if the population grows, people will need a place to live.  And so, for instance, Paradise, CA, is worth protecting.  Those 27,000 souls have rights, too, and a claim on the conscience of all of us.  We can further ask: If they are left homeless and destitute, where will they go, and what will they cost?

Yet the emerging line, courtesy of the elite chattering class and the Main Stream Media, is that the problem of wildfires is insoluble.  For instance, here’s a headline in The Atlantic that reads, “The Simple Reason That Humans Can’t Control Wildfires.”  The answer, according to the article, is that fire is “like an ocean”—that is, too big to contain.

Yet in point of fact, the reality of the ocean is what points us to a solution—if we want it.  As this author wrote in response to last year’s wildfires, we could be desalinating ocean water on a mass scale, and using that fresh water to easily put out these fires.

Yes, seawater desalination is expensive, as is building the necessary delivery infrastructure to places such as Paradise, but such expense must be weighed against the cost of paying for the flaming status quo.  That is, if last year’s fires cost $180 billion–and this year’s fires might cost even more–then we can see that even large expenditures on water desalination are still cheaper than fiery devastation.  (Breitbart News’s Joel Pollak has written extensively about California water issues, as part of an ongoing series.)

Needless to say, a plan for actually putting out fires will face opposition.  Perhaps most obviously, any effective plan for extinguishing fires will encourage growth in rural areas.  And the greens, thinking about, say, the Spotted Owl and the Delta Smelt, don’t want that.  As we know, in recent decades, the greens have won a lot more legal and regulatory battles than they’ve lost—and their victories are a big reason why Paradise is no longer a paradise.

Moreover, the greens will think that if we develop a plan for putting out fires, we will be undercutting their core argument—that the only acceptable solution to the problem of wildfires is to “take action” against climate change.   Yes, to many, that will seem like a strange argument, saying that we must make the perfect the enemy of the good.  That is, we can’t do anything about wildfires in California until we do something about climate change worldwide.  Do we really want to wait that long?  And do we really think we can pull that off?  Or is talking about climate change in the future just an excuse for crimping the population in the here and now?

Such a green do-nothing stance might strike many as hypocritical because, after all, we’ve been preventing, and putting out, fires in urban and suburban areas for a long time. So why now should we hold rural—and now, on some occasions, suburban—America hostage to the hopes for radical decarbonization through some some globo-mechanism, such as the Paris Climate Framework?

Yes, it’s a bit odd to think that if we can’t solve the problem of protecting a little place such Paradise, that we can then somehow go ahead and save the whole wide world.  (It wouldn’t be the first time, of course, that the elites were more interested in saving the world than in helping those closer.)

Indeed, as we dig into the arguments against doing anything about fires, we see the full depths of the opposition to actually stopping fires; the opponents would rather deliver a larger critique of civilization itself.  For instance, here’s a recent headline from Bloomberg News: “Don’t Think It Will Be Easy to Fireproof California.”  The piece quotes one “expert” as saying, “The idea of defensible space strikes me as an intrinsically Western one.”  That is, Western Civilization = Bad.  (Admit it: You knew that the MSM would get there soon enough.)

Well, actually, here’s some news: Defensible space is a global concept, embraced by peoples around the world.  The ancient Babylonians and Egyptians put up walls around their cities, as did the Chinese and the Incas.   Indeed, it’s deadly obvious that human beings anywhere won’t last long if they don’t have some sort of shelter, which soon enough becomes “defensible space.”

Moreover, all these civilizations chose to dig out irrigation channels and build berms to you guessed it—move fresh water around and keep it “defensible.”

So we’re back to the ultimate question: Do we want people to win, or not?

Finally, there’s a political dimension here, too.   In 2018, the California Republican Party has been defeated, badly, yet again. So perhaps Republicans will see the value in trying something different.  Perhaps Golden State GOPers will embrace a bold agenda of water desalination and infrastructure building, so that Californians can spread out from crowded cities, in which the Democrats have them penned, and live independent and free on homesteads.  Such a vision–extending the American Dream to all–would be the sort of tonic that the GOP needs.  Let the elite Democrats own, as they seem to want to, the idea of green limits and pessimism.  Instead, Republicans will take ownership of life, liberty, and the pursuit of happiness.